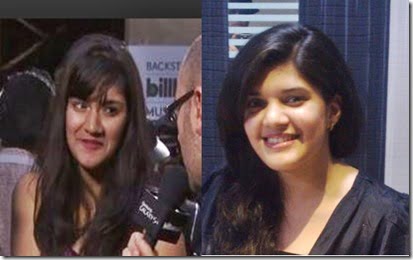 Miss Khyati Shah, you might not know her just yet but on May 19 she actually became noticeable for one rising singing star! That would be recording artist, songwriter and producer Miguel! It’s such a shame Miguel hasn’t been able to really hit it off and this unfortunate incident might just put his career even more in the shadows!

I’m pretty sure you remember when Miguel‘s now infamous failed stage jump at the 2013 Billboard Music Awards robbed him the spotlight of his own performance! And now it seems it may wind up costing him after all! The singer jumped over a pit of audience members and crash landed onto one unlucky female concertgoer named Khyati Shah. Immediately following the incident, Shah conducted an interview alongside Miguel smiling broadly and indicating that the whole incident was forgotten. But Shah was doing the interview while holding an ice pack to her elbow. Last time I checked the now-not so hilarious video the impact was to her head!

“Well, I think it’s kind of clear what happened,” “But I’m very happy to introduce my new friend, Khyati, we just met . Unfortunately we did not meet under the best circumstances, but I think we’re okay.”

And a clearly affected Khyati said: The only way I would have said that is if some cash would’ve been offered to me! But now, a couple of week later I guess she is thinking clearly or maybe not?? It looks like the young woman may be considering a lawsuit! After experiencing some complications following her violent meeting with Miguel Shah’s got an attorney, Vip Bhola, who told “E! News” that a decision will be made soon on whether to file a lawsuit after Khyati’s most recent medical results.

“We will determine whether to file a lawsuit after we have feedback from medical providers,”

He declined to give a timeline on when any civil action might be filed. According to Bhola, Shah has been experiencing unspecified “difficulties” since the awards show mishap. These difficulties can be translated to possible brain damage!

So far neither Miguel or the BMA people have said anything about it but I’m sure we’ll hear something rather soon!