Stacy Reed Payton is the lovely and supportive wife of actor, Khary Payton –known for his numerous roles across various films, cartoons, and video games and most recently on The Walking Dead.

As you may know, Stacy’s man plays Ezekiel on AMC’s The Walking Dead, but prior to landing the role in 2016, Payton had been a well-known fella in the industry.

Born May 6, 1972; the Georgia native began his career in the mid 90’s after he landed a small role on the series Street Shark. In 2003 he appeared in the romantic comedy Latter Days where he starred opposite, Wes Ramsey. Payton is also well known as a talented voice performer, he gave life to the animated character Cyborg on Teen Titans and Young Justice.

He’s also appeared on TV, in 2011 he had a recurring role as Terrell Jackson on General Hospital.

Payton made his debut on The Walking Dead in season 7. He told Entertainment Weekly, he landed the role after he spent 72 hours memorizing a five-page monologue. He explained the process was made on tape so it was only him and the casting director. During the interview, the 45-year-old revealed his wife, Stacy Reed Payton is also a huge fan of the show. 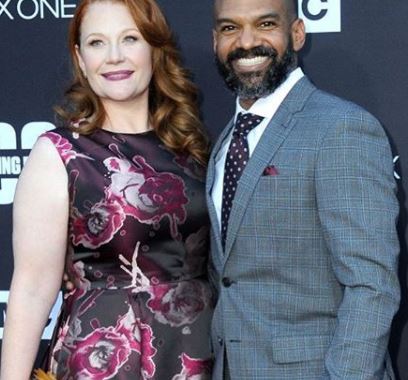 But before we get to Stacy, there was actually Payton’s first wife. The actor tied the knot to Linda Braddock in 2001, however the marriage split in 2009. This would make the lovely Stacy, his second and current wife.

He recently had this to say about Stacy Reed Payton

There were times when all we had was each other. We’ve been through so much. Thank you for everything. I love you, Stacy.

According to her IMDb page, the pretty red head is an actress, known for The Job (2003), Engaging Peter (2002) and Anatomy of Hope (2009). Stacy Reed Payton also goes by Mrscyborg on social media.

She’s had a number of roles on important TV series such as Grounded for Life, The West Wing, Charmed, Criminal Minds, My Name is Earl, The Riches, Private Practice, Weeds, among others.

Stacy who is the mother of two children with famous hubby Khary –is also a speaker on Fave Parenting.