According to TMZ, his lawyer says the rapper will be on house arrest for a few months and will then be on probation. Gucci was able to leave four months early due to a motion filed by his legal team, in which it was explained Gucci hadn’t received credit for previous time served.

He had been behind bars since September 2013 on a probation violation. Sources close to the 36-year-old rapper say he is more than ready to get back into the rap game.

Keyshia Ka’oir is obviously more than happy to be welcoming her man and even posted a photo of them holding hands with the hashtag, #reunited. 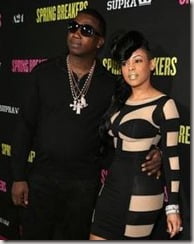 Her man is one of the most beloved figures in the rap industry and has released a staggering 41 mixtapes, 9 studio albums, 3 collaborative albums, a compilation and an EP throughout his 15-year career.

Mane stated rapping at the age of 14. He was born Radric Davis in Birmingham, Alabama but raised in Atlanta, Georgia. His most successful single to date is “Wasted” which peaked at No. 36 on the Billboard Hot 100 and his 2010 album The Appeal: Georgia’s Most Wanted is his most successful to date. He also made an appearance in the 2013 film Spring Breakers alongside James Franco and Selena Gomez. 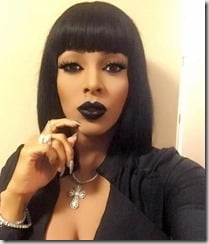 Keyshia Ka’oir is a cosmetics mogul, with over 800K followers on Twitter alone, she has become almost as famous as her man.

Keyshia Ka’oir (previously Keyshia Dior) is a model, actress, stylist & entrepreneur extraordinaire.  She is the owner and CEO of  KA’OIR, a bold new cosmetics company founded  in 2011.  The KA’OIR COSMETICS line embodies Keyshia’s confident attitude and is widely recognized for its bright, vibrant lipstick and makeup shades that clearly “stand out from the rest”.

Accoridng to her own website, Keyshia Ka’oir  is originally a Miami-based celebrity stylist with Jamaican roots, KEYSHIA KA’OIR got her modeling start in late 2009 when Director Paul Coy Allen cast her for a starring role as “Lisa”, the jealous ex-wife in the Timbaland & Drake mini-movie /music video, “Say Something”.  Soon after, the hustler and model known as “Keyshia Dior“, embarked on a 2010 whirlwind push which led to modeling features in countless music videos, covers on several national magazines and culminated with winning nationwide recognition as the 2010 XXL Magazine Model of the Year.

In 2011, she formally changed her name to “KEYSHIA KA’OIR“  to stand behind her brand and launch the vibrant new makeup company, KA’OIR COSMETICS.