Kevin Cooper is an inmate currently in San Quentin and on his way to death row, however Kim Kardashian may be able to help.

Kim believes Cooper has been framed and has been able to pull some strings to get California’s governor to look into his case and request additional DNA testing. Kim a reality star at heart by day but a fighter for reform in the criminal justice system by night -seems to have found her next case in Cooper.

Kevin has been on death row since the ’80s, when he was convicted of murdering four people in Chino Hills, California. Turns out, Kevin has maintained his innocence all these years. So good old Kim decided to pay him a visit. According to reports they have been in touch since last October.

She made his way to San Quentin State Prison on Thursday and reports say she and Kevin Cooper spent at least two hours talking. As a result, the TV star is convinced of his innocence. 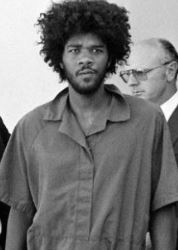 Kevin Cooper was born January 8, 1958 as Richard Goodman, however he was placed in adoption by his birthmother and was subsequently adopted by Melvin and Esther Cooper, who renamed him Kevin. He had a troubled upbringing in which he ran from home numerous times.

He began his career in crime committing burglary in the late 70’s. He served time in jail in Pennsylvania but after being released on probation in 1982 he moved to California where he quickly returned to jail after being convicted of two burglaries.

But it was in 1983 that his life took a turn for the worse, he was accused of the of Doug and Peggy Ryen, their 10-year-old daughter Jessica and 11-year-old neighbor Christopher Hughes.

At the time tests proved Cooper was in the Ryen’s home and that Cooper’s blood and the blood of at least one victim was on a T-shirt found by the side of a road leading away from the scene of the murders. But his lawyer says investigators planted his client’s blood on the T-shirt.