Keren Woodward is the long time girlfriend of English vocalist, Andre Ridgeley –who was one-half of the ’80s rock group with George Michael –who suddenly died on Christmas day.

“Heartbroken at the loss of my beloved friend Yog.

“Me, his loved ones, his friends, the world of music, the world at large. 4ever loved. A xx”

Karen’s long time partner is a singer, songwriter, and guitarist who sold over twenty-five million records worldwide with Wham! He is known as the silent musician of Wham!

Andrew Ridgeley was born January 26, 1963 in Surrey, England. He was raised by a British mother and Egyptian-Italian father.

Andrew Ridgeley and Goerge Michael  met in their childhood and formed a band which was originally called the Executives and eventually was changed to Wham!

The two produced such hits as “Wake Me Up Before You Go-Go” and “Careless Whisper.” Although he occasionally helped write music, sang, and played instruments, his chief role in the group was that of George Michael‘s best friend. Since the breakup of Wham! In 1986, Andrew Ridgeley has spent his time producing and album and pursuing his own personal interests. He produced several solo songs including “Shake,” “Red Dress” and “Mexico.” Ridgeley’s musical influences include the Beatles, the Rolling Stones, the Everly Brothers and David Bowie.

According to online info, following the band’s split, Andrew went to Monaco to become an auto racer. His days as an auto racer did not last long, as he crashed several cars and had difficulty getting sponsors.

He then went back to singing and also signed with Columbia Records in 1990. The partnership produced one album, however sales were unsuccessful, and when it reached only #70 on U.S. charts, Columbia canceled Ridgeley’s contract. He later appeared at Michael’s live shows playing guitar.

He met the stunning Karen Woodward in the mid-1980s while working in the industry. They officially began dating in 1990, according to the Express.uk. 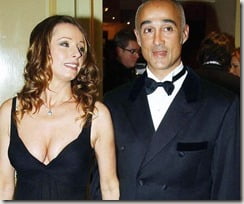 Keren Woodward is also a singer whom you may or may not know from the British girl group, Bananarama. She has been active since the late 70’s.

Bananarama is the most successful British girl group in pop history. The trio was comprised of lifelong friends Keren Woodward and Sarah Dallin along with Siobhan Fahey, whom Dallin befriended at the London College of Fashion.

After getting their start singing at friends’ parties and at nightclubs (where they performed accompanied by backing tapes — none of the women played her own instrument), they came to the attention of ex-*** Pistols drummer Paul Cook, who produced Bananarama’s first single, a cover of Black Blood’s “A.I.E. (A Mwana).”

After the group backed Fun Boy Three on the single “It Ain’t What You Do, It’s the Way You Do It”

In 1986, Bananarama’s fortunes improved considerably when they joined forces with the production team of Stock, Aitken & Waterman, who produced the album Wow!; the group’s most successful outing to date. 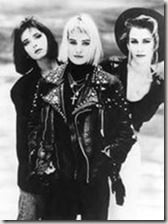 In 1987, Fahey left the group. Woodward and Dallin, meanwhile, enlisted pal Jacquie O’Sullivan, formerly of the Shillelagh Sisters, to fill the void. O’Sullivan too exited, and Woodward and Dallin forged on as a duo for 1992’s Please Yourself and 1995’s Ultra Violet. After a brief hiatus, the group returned with 2005’s Euro-dance-friendly Drama and 2009’s similar Viva.

Karen Woodward continues to perform as Bananarama with Dallin. In 2013, the pair appeared in an episode of the BBC quiz show Pointless Celebrities.

In the past, Woodward has criticized the British music charts, saying that acts no longer had the opportunity to climb to a higher position each week, as was commonplace in the 1980s.

Karen was in a relationship with model David-Scott Evans –with whom she became the mother to son, Thomas born in 1986.