Kirby Jenner, the comedian who has gained popularity posing as Kendall Jenner’s fraternal twin brother -has now landed his own show.

According to reports, Kirby who is often described as the seventh Kardashian, scored his own show on Quibi.
Though his real identity remains a mystery, the man describes himself as an Amatuer Model and we could say he began his career self proclaiming he is the “fraternal twin brother” of Kendall Jenner.

Some say his social media is a parody account run by a small creative agency in L.A; but whatever it is, Kirby has certainly gained a spot with Kardashian clan and his account now has over 1 million followers.
In his hilarious account, he pretends to be Kendall’s often confused and incredibly sheltered twin whom appears not only close to Kendall but with the whole family -even if he needs to photoshop himself in, you can always count on Kirby Jenner to be there. 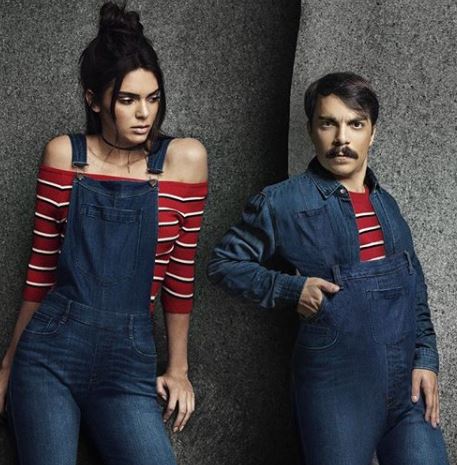 His explanation as to why Kendall crops him out of all her photos is pretty on point too -Kirby who never looses character, said during an interview
“Oh well actually Kendall isn’t doing any of the cutting herself … I think it’s mostly this guy Mario on her fashion team,” “I accidentally flew my drone into his face and I don’t think he’s forgiven me. Yikes, I know. But also, getting cut out of photos is just part of the fashion world I guess.”

According to People, Kirby has been doing this for a while, he first posted an Instagram on July 24, 2015, when he shared a side-by-side blend of his and Kendall’s faces. Apparently the supermodel liked several of Kirby’s posts and began following him. It has gotten to the point that now Kendall and mom Kris Jenner have been announced as executive producers in the series titled Kirby Jenner for Quibi. The show will chronicle Kirby’s daily life, hailing him as “the ‘unsung hero’ of the Kardashian/Jenner family.

Expect Kirby Jenner in 2020.
Find him on Instagram here.