If you are a fan of actor Milo Ventimiglia then you ought to know that the handsome and seasoned star is off the market.
Milo Ventimiglia girlfriend has been revealed as a pretty lady named, Kelly Egarian.

Kelly’s famous beau is well known for his acting roles both on TV and the big screen. Milo can currently be seen on the hit TV series, This Is Us.
For more info about the couple including their careers, personal details, their net worth and achievements, keep on reading.

Kelly Egarian is the hot girlfriend of This Is Us star, Milo Ventimiglia. The couple has been dating for some time and we thought you should know more about this hottie.

Kelly’s guy is currently one of TV’s hottest actors. After his initial TV success in shows like Gilmore Girls, Milo has enjoyed a surge in popularity thanks to his character Jack Pearson in This Is Us.
While his co-star Mandy Moore is happily married in real-life, Milo has kept his romantic life out of the spotlight, that is until Kelly Egarian came along.

Where and when was Milo Ventimiglia girlfriend Kelly Egarian born

There’s not much information about Kelly Egarian’s early life other than she grew up in New Jersey, her exact birth date is also not known.
Online sources state that she is currently in her early 30’s, making her several years younger than her actor stud, who is currently 43. 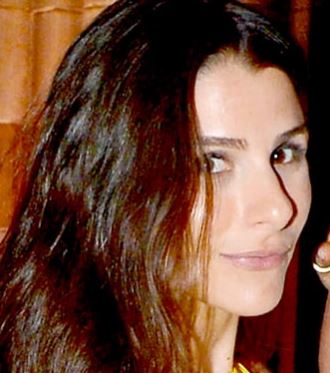 Milo Anthony Ventimiglia was born July 8, 1977; the youngest of three kids born to Carol and Peter Ventimiglia. He has two sisters, Leslie and Laurel.
His father is of Italian-Sicilian descent while his mother is English and Scottish.

Kelly Egarian is a career woman, that said her net worth and exact income have not been disclosed.
Assuming she and Milo are in a committed relationship that may end in marriage, she has nothing to worry about because her man has an estimated net worth of approximately $12 million.
According to most recent sources, Milo gets paid at least $250k per episode.

Since Kelly Egarian is not a public figure and prior to her association to the actor she led a pretty normal life as an average mortal, the details of her past relationships are not known.
However, according to Marie Claire, she was linked to NSYNC alum JC Chasez years ago.

The same can’t be said about Milo who has been linked to more than one co-star in the past. He and Alexis Bledel, his Gilmore Girls co-star were a thing from 2003 until 2006.
He was also in a relationship with actress Hayden Panettiere, whom he met while shooting Heroes. He and Panettiere broke up in 2009 after two years of dating. 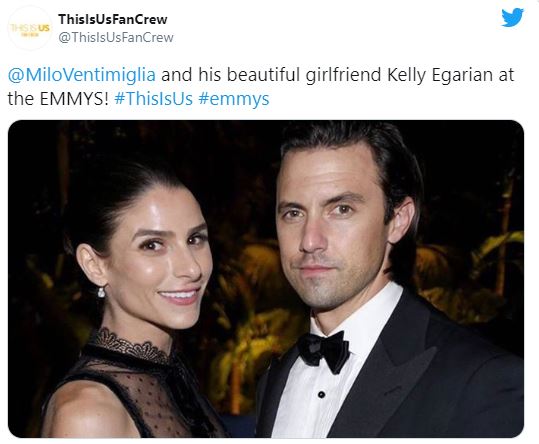 The actor who has never been married, took new girlfriend Kelly Egarian to the 2018 Emmy’s making their relationship official. Thought reports at the time noted they didn’t walk the red carpet together, Kelly sat next to him throughout the ceremony and the two later headed to the Governors Ball.

Their relationship however dates back to 2016. In December of 2016, Ventimiglia was spotted with a “mystery woman” on a lunch stroll near Venice Beach. Three months later, In Touch identified his new girlfriend as Egarian and reported they had been dating for five months.

Milo previously dated a series of celebrities, including his Heroes costar Hayden Panettiere and his former Gilmore Girls costar, Alexis Bledel.
The actor has decided to change things up and date someone who isn’t in the industry with Kelly Egarian working as the marketing coordinator for Stella McCartney. She’s also considered a professional stylist.

As for Milo’s career, it is well documented; the California native wrestled, was in the drama club, and was President of the student government at El Modena High School in Orange, California. After graduation in 1995, Ventimiglia briefly attended UCLA as a theatre major before landing his first TV role.

During his early career, he guest starred in numerous TV shows The Fresh Prince of Bel Air, CSI: Crime Scene Investigation, Sabrina, the Teenage Witch, Law and Order and Boston Public.
His popularity increased as he stole our hearts as Jess Mariano on beloved hit show, Gilmore Girls, a role he played from 2001 until 2004.
He was later casted on the WB series The Bedford Diaries and had a recurring role on NBC’s American Dreams. In 2006, Ventimiglia played Rocky Balboa’s son in the sixth and final installment of the Rocky series, Rocky Balboa. However, Ventimiglia’s big break came in 2006 when he received the part of nurse-turned-superhero Peter Petrelli on NBC’s Heroes. 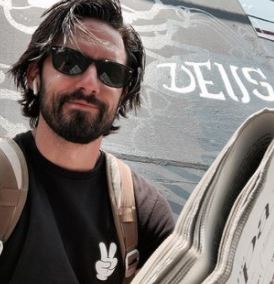 Other acting credits include Grown Ups 2, Grace of Monaco, Killing Season, Kiss of the Damned and Chosen.
Most recently he plays the perfect husband (Jack Pearson) to Mandy Moore’s character in the critically acclaimed NBC drama, This Is Us.
For his role as Jack Pearson, Ventimiglia has been nominated for the Primetime Emmy Award for Outstanding Lead Actor in a Drama Series.

Though he has never been married, Milo Ventimiglia may be getting closer to making the big decicion now that there’s a special lady in his life.

Milo Ventimiglia and girlfriend Kelly Egarian have been together for a while, even if they were only a couple for a few months, in Hollywood that’s a few years; and you never know, this year could be, the year for these two.

Sad part is, while the alleged couple has been spotted together and the two act as boyfriend and girlfriend, neither has publicly confirmed a romantic relationship.

There’s no clear information regarding Kelly Egarian favorite hobbies, however, one can assume her personal interests include everything fashion.

Egarian certainly has great taste, working for Stella McCartney has sure paid off! The stunning brunette wore to the Emmys a black sleeveless dress, with delicate sheer embroidery.

As for Milo’s hobbies, just by taking a quick glance to his social media, you can tell the actor is into traveling and photography.

Kelly Egarian has not disclosed her personal information. As for her boyfriend, 43-year-old Milo is 5 ft 10 in and weights approximately, 78 Kg.

Where can I find Milo Ventimiglia girlfriend Kelly Egarian

Sorry fellas but there isn’t much more about Miss Egarian and she also appears virtually nonexistent. It sees she isn’t a big fan of social media. 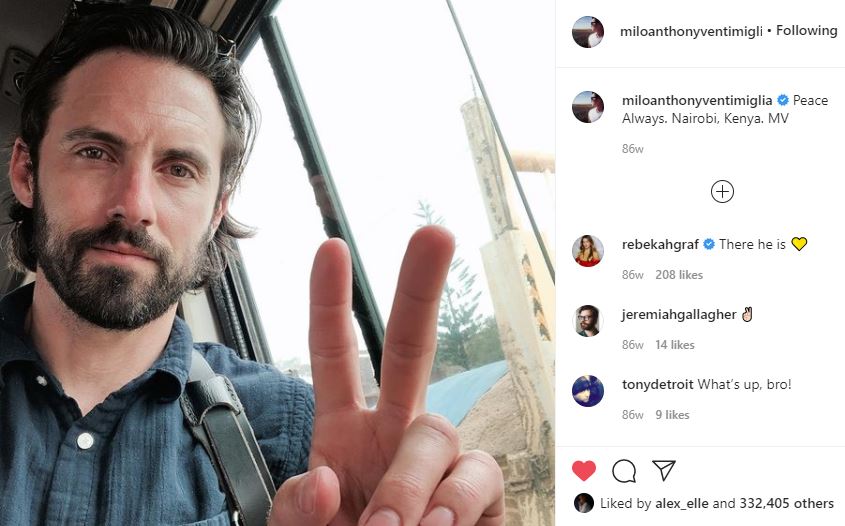 Kelly has a background in fashion, listing skills such as textile design, luxury goods and visual merchandising. She also used to work as a correspondent for Attack of the Show.

Working for Stella McCartney should also be considered a highlight in her career. 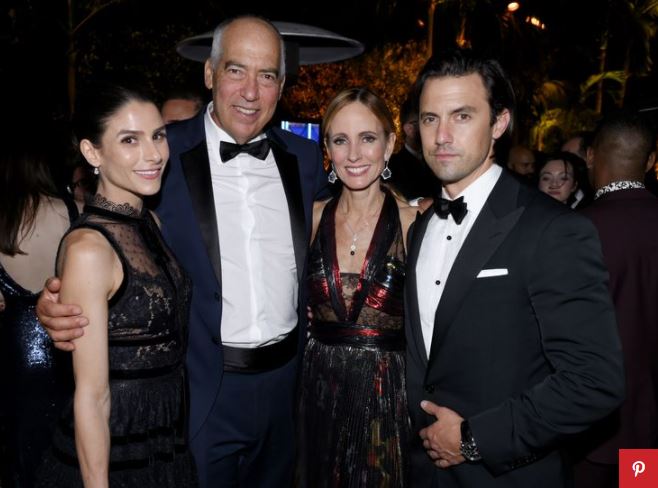 It is safe to say one thing in common about Milo and girlfriend Kelly, is that they both enjoy their privacy. The couple keeps an extremely low profile and they are yet to confirm a relationship between them, so it is hard to tell how or where exactly these two met.

Milo Ventimiglia has never been married nor has he fathered any children. As for Kelly Egarian, we can only assume she’s also yet to become a mother.

“Everything [on the show] feels very close to how I was raised. The show hasn’t inspired me to go have kids, I’ll tell you that much”

It is believed the two began dating somewhere in 2016, that said it is not of public knwolegede how they became romantically involved.

Both Milo Ventimiglia and girlfriend Kelly Egarian are currently based in Los Angeles, California.

What does Milo Ventimiglia girlfriend Kelly Egarian do now?

While Milo stays busy appearing in season 5 of This Is Us, marketing coordinator Kelly Egarian keeps busy doing her own thing.