Katherine Keating has been named as the possible mystery woman who appears in a video waving goodbye to the Duke of York while leaving Jeffrey Epstein’s mansion.

In recent Jeffrey Epstein’s saga, Katherine is allegedly the woman seen leaving the convicted late Epstein’s New York mansion in 2010. The video was published by The Mail on Sunday.

Katherine is not your ordinary gal, she happens to be the middle daughter of Paul Keating -a former Australian prime minister who served from late 1991 until early 1996. She has two sisters Alexandra and Caroline; and a brother, Patrick Keating.
Katherine who is now 37, has lived in the United States for at least a decade and sources have confirmed she in fact had links to Epstein and his associate Ghislaine Maxwell. 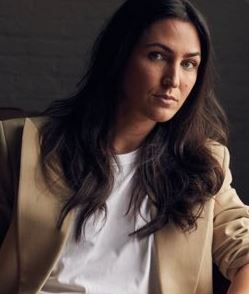 Prior to moving to the US, Katherine was an advisor in Bob Carr’s NSW Labor government and ran an international consulting business. She describes herself as extremely ‘political’ and currently serves as Chief Sustainability and Strategy Officer at management firm Maverick.
The stunning bruenette used to host a YouTube interview series for The Huffington Post called One On One and previously worked at youth media and broadcasting company Vice. She served as host and producer for the Viceland TV channel and as publisher of its philanthropic and advocacy arm Vice Impact.

Keating also sits on the Berggruen Institute’s 21st Century Council as a New Leader, was recently appointed to the Ambassador Council of the International Crisis Group, she sits on Global Citizen’s Mandela 100 Advisory Committee.
She joined Maverick in 2018 according to Variety. She provides strategic resources to partner companies in the entertainment, tech and direct-to-consumer industries. The firm’s clientele includes a number of prominent entertainement figures such as Paul McCartney, U2, Madonna, Britney Spears, The Weeknd and Nicki Minaj.