Eve Brosnahan is the devastated sister of fashion designer Kate Spade –who was found dead at her Upper East Side home.

Eve’s famous sister is thought to have taken her own life by hanging herself with a scarf, she was found by her housekeeper. Reached by phone Eve Brosnahan told the Daily News, “It’s very difficult,” “I can’t right now. I just can’t.”

Kate’s death has shocked the fashion community and those close to her and her brand. Eve’s sister became a fashion powerhouse following the debut of her handbags store in the 90’s. She sold the company in 2007 and dedicated her time to raise her daughter Frances –born in 2005.

Kate and her husband/business partner, Andy Spade (David Spade’s brother) –made a comeback to the fashion world with the Frances Valentine brand in 2016. 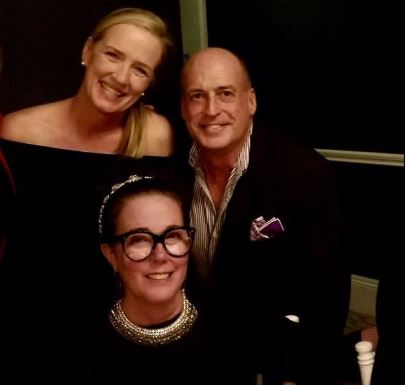 Kate was born Katherine Noel Brosnahan. Before her tragic death, she changed her name to Kate Valentine. Eve Brosnahan as well as her late sister, is the daughter of June Mullen and Earl Francis Brosnahan. Their father ran a family construction business according to the NY Times.

According to her LinkedIn page, Eve Brosnahan is the owner and producer at Mullen Management Employee Benefits –which she began in 2007 in Santa Monica, California. She holds a BS from Arizona State University.

Her company offers quality health insurance, according to its website Mullen Management counts with years of experience, “We know that cost effectiveness plays a key role in healthcare today. We strive for balance and utilize extensive cost-benefit analysis in finding superior plan designs with reasonable premium for our clients.” They specialize in small to mid-size employer groups as well as individual and family plans.

According to wedding registry website, The Knot, she and Kent Brisley were married in Santa Monica, on October 7, 2017.