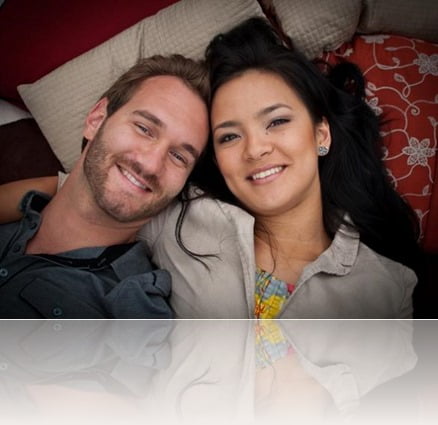 Who is Kanae Miyahara? Hos did Nick Vujicic met his wife? We have all the answers, but first meet Kanae Miyahara, I believe many of you know who is motivational speaker Nick Vujicic,  that amazing man who was born without legs and arms, who has been happily married to this beautiful woman.

Many wonder what is the center of his strength, his motivation, what droves him to do such great things, reach so many lives, and the answer to that sums up to three letters, GOD!!!

I could go on and talk non-stop about 29 year-old Nick Vujicic who I had the great pleasure to meet personally at one of his motivational conferences, he really blew my mind!! But we are all about his stunning wife  Kanae Miyahara. 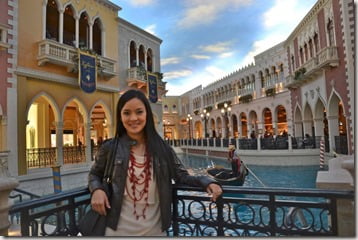 In 2008 Nick flew to Texas to give one of his amazing speeches, his friends Tammy a felloe speaker and her husband were there and they were not alone, they brought their friends sisters Yoshie and Kanae Miyahara who would baby sit from them from time to time. 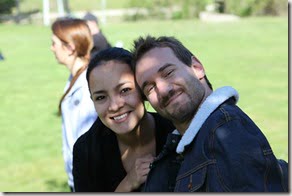 Nick talks about meeting his Kanae on Chapter three of his book Unstoppable.

“My wife Kanae and I fell in love at the top of a Bell Tower in McKinney, Texas at the “Adriatica.” It was at a night where I only spoke to 16 people, and we watched the Butterfly Circus. I shared about the ministry’s goals and heart in reaching the world. Fireworks were in our minds and hearts when our eyes connected that night.

Kanae and her older sister, Yoshie, came to my speech with my friend Tammy, who is also a speaker and author, and her husband, Mark. The sisters were then working sporadically as nannies for the couple, but since they were more like family, Tammy had invited them to meet me.

Kanae and Yoshie have exotic looks because their mother is Mexican and their father, who sadly passed away, was Japanese. They are both striking, but while speaking that day I had a clear view of Kanae, and I could not take my eyes off her. I could hardly concentrate on what I was saying.

After my speech, I stuck around to talk with members of the audience. Kanae and Yoshie came with Tammy to say hello, and I was very happy to meet them. In fact, when they tried to walk away to make room for other people wanting to speak with me, I told them to stay close so we could get to know one another.

Whenever I had a break, I’d try to get in a few words with them. The more I chatted with Kanae, the more I wanted to whisk her away and find out all there was to know about this enchanting girl who seemed so self-assured and kindhearted.

Finally, as they were preparing to leave, I made a bold move. “Let me give you my e-mail address so we can stay in touch,” I said to Kanae. “Oh, that’s okay, I’ll get it from Tammy,” she replied.

I really wanted to establish a line of communication with her so that I didn’t miss the opportunity to get to know her better. Part of me wanted to beg and plead: I want to give you my e-mail myself so I’ll be sure you have it!

That’s what I wanted to say, but my father had instilled in me that real men do not beg. I took Dad’s advice and played it as cool as I could, given my instant infatuation with this enthralling young woman.

Kanae and Yoshie then left with Tammy and Mark. My friends and I were just a few miles down the road when Tammy sent me a text message: “What did you think?”

“She is one of the most beautiful women of God I’ve ever met, inside and out,” I texted back. “She literally took my breath away!”

Kanae did get his e-mail from Tammy, they continued to get in touch, they saw  each other again, they started dating and hen one day Nick proposed.. 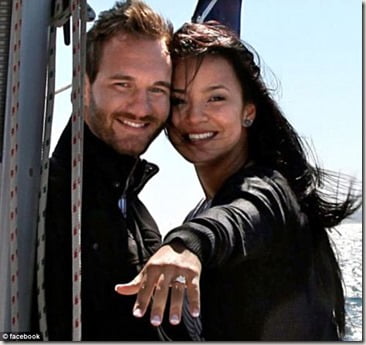 They engagement came in August, 2011, he put that beautiful ring on Kanae’s finger with his mouth and then he said the most beautiful words every girls wants to hear coming out from her man’s mouth.

“Baby, I love you, would you love to marry me and spend the rest of your life with me?” Nick said, Kanae just cried. 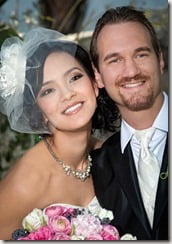 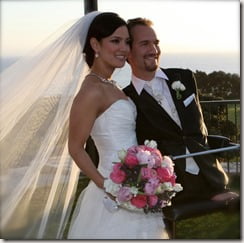 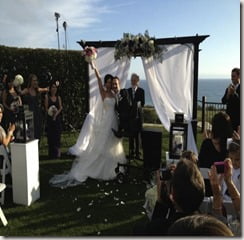 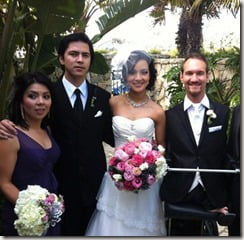 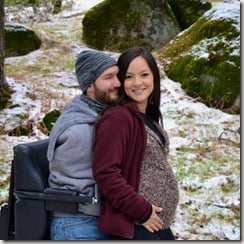 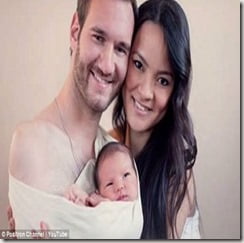 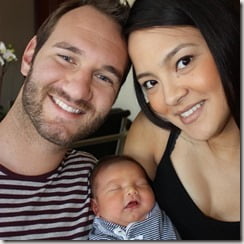 They were blessed with the birth of their son Kiyoshi James Vujicic, this lovely family lives in South California.