Kaitlan Collins is a journalist who served as a White House correspondent but has now been banned from stepping into White House events.

Collins who is employed by CNN was excluded from the meeting between Donald Trump and Jean-Claude Juncker. According to reports, she was cut from attending the top press event after she made questions that made President Trump ‘uncomfortable’ and were described by the White House as ‘inappropriate.’

Kaitlan is said to have asked President Donald Trump about Vladimir Putin’s postponed visit and the Michael Cohen tapes –while at a Rose Garden event and was kicked out after being accused of ‘general displays of rudeness’ –by the White House.

The ban parked outcry even from rival Fox News and the White House Correspondents Association. CNN said in a statement that Collins had been approached by White House communications director Bill Shine and press secretary Sarah Sanders informing her of the ban imposed on her. 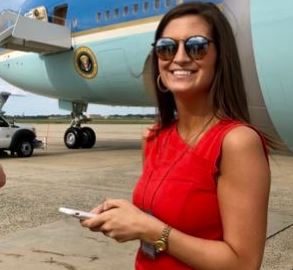 According to her CNN profile, Kaitlan Collins ‘is a CNN White House Correspondent based in Washington, D.C.’

Collins was born April 7, 1992; the Alabama native attended and graduated from the University of Alabama with a Bachelor of Arts in journalism and political science. While at University, she was a member of Beta Mu, Chapter of Alpha Phi.

Prior to joining CNN in 2017, Kaitlan Collins served as White House Correspondent for the Daily Caller. While working at the Caller, she covered the Trump administration and the 2016 election.

Since arriving to CNN, she ‘has broken several stories in her coverage of the Trump White House, traveled with President Trump in Asia and reported extensively on the Senate special election in her home state of Alabama.’

The 26-year-old is known for her fierce interviewing technique.