Justin Ervin is the husband of plus-size model Ashley Graham. His **** wife recently oozed confidence and *** appeal at an event in Miami, Florida earlier his week.

Ashley Graham became the first plus-size model to grace the cover of the highly acclaimed Sport Illustrated magazine. This year has started out great for the 28-year-old who landed the cover on this year’s swimsuit issue, along with MMA fighter Ronda Rousey and model Hailey Clauson.

A size 14-16 who wears a triple-D bra, Graham had a bikini ad in last year’s issue. But landing the cover is another order of magnitude.

But she told Access Hollywood Live, “To actually be on the cover, I didn’t think that Sports Illustrated was going to take that risk. But right now what they are doing is they are setting the standard for what everybody else — magazines, designers, people in Hollywood, should be doing.”

Graham, began her modeling career at age 12. Like most super models in the industry, she was spotted by a modeling scout while she was at a shopping mall in Omaha, near her hometown of Lincoln, NE.

Ashley has always had curves, and instead of trying to get rid of them, she embraced the “woman in the mirror.” She bills herself as a “body activist,” advocating for the 50% of American women who wear a size 14 or larger, an $18 billion market. She’s also a businesswoman, with her own $1.6 million (sales) lingerie line with Canadian retailer Addition Elle. 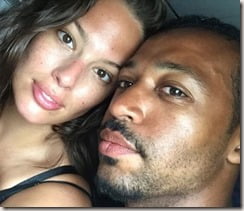 Someone who also must be super excited for Graham, should be her hubby, Justin Ervin. Ashley met her husband Justin Ervin in 2009, and the couple were married a year later.

According to his LinkedIn, Justin Ervin is a freelance Director, Producer, Cinematographer. Ervin is a graduate of SVA with an MFA in Social Documentary Filmmaking.

He’s worked in production since 2002 as a PA, AC, and Camera Operator. Since 2001 he has conceived, produced, directed and edited several documentaries both domestic and international, having shot in a number of countries, including: Spain, France, Italy, Kenya, Tanzania, Rwanda, Colombia and South Africa.

His recent feature documentary, “Elephant in the Room” was Official Selection in the 2013 San Diego Black Film Festival as well as the 2013 Vail Film Festival in Vail, CO.

During an interview with Labelingmen, Justin Ervin revealed he and his wife have worked together. He said they collaborated on a commercial for her line, Ashley Graham for Addition Elle. She was also a co-producer on “Six Months Later” –one of Ervin’s film projects.