Juli Briskman is the woman who lost her job all because she made the decision to flip her finger at Donald Trump’s motorcade.

It was during the evening of Halloween that 50-year-old Virginia native Juli was pictured giving a middle finger to the president. The incident that went viral, took place outside Trump’s golf course in Sterling, Virginia.

The brave cyclist then called her employers to reveal that she was the woman in the photo Julie a mom of two, worked until recently as a contractor at Akima LLC. When speaking about the incident to media, she didn’t hesitate to admit she would do it again. 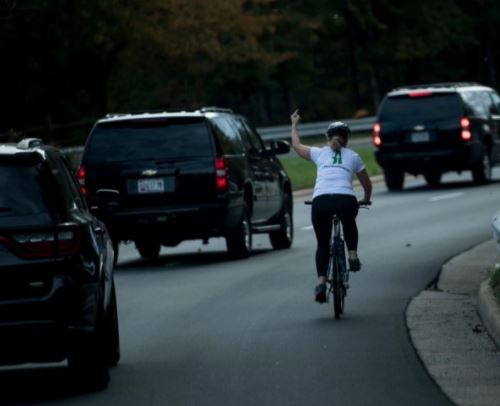 According to her LinkedIn, Juli is listed as a “Strategic thinking and stellar content that makes your marketing, communications & social media shine.”

Briskman holds a journalism degree from the Ohio State University. From 1994-1998 she obtained her MBA, Marketing from the Johns Hopkins University. She is currently attending Georgetown University in pursuit of a Digital Marketing Certificate.

While working for Akima, Juli was in charge of the company’s Facebook page. During this work, Briskman found a senior company director discussing the Black Lives Matter movement. She was previously the Digital Strategist and Advocacy Specialist at ICMA and for four years she was the Editorial and Marketing Manager at Phillips Business Information. She was also a Community Liaison Officer for the U.S Department of State. During that time, she was based in Kazakhstan and Latvia.

In an interview with the Huffington Post, Juli said she is working with the ACLU in a case against her former employers.

When not working as a contractor, Juli Briskman spends her time as a Sunday school teacher. She volunteers at Galilee United Methodist Church and at Horizon Elementary School. Briskman who is the mother of two teenagers also teaches yoga part-time but has also been receiving threats through the yoga studio she works at.

She explained the reasons for flipping Trump came from her frustration after thinking he was playing golf while DACA recipients are getting kicked out or that only a third of Puerto Rico has power.

Though she has been criticized by some, others have named her a hero on social media. Are you a critic or a supporter of Juli?