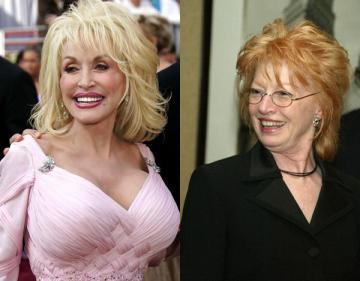 Judy and Dolly met when they were growing up in the foothills of the Great Smoky Mountains. Judy lived nearby and they were opposites, Judy being shy and Dolly loud and extrovert. But they achieved the perfect balance as friends.

Both of them have laughed many times over repeated rumors that they were secretly ******* lovers. In an interview on Nightline a while ago, Dolly laughed off the idea saying “Judy and I have been best friends since we were in third or fourth grade. We still have a great friendship and relationship and I love her as much as anybody in the whole world, but we’re not romantically involved.” In fact, Dolly has been married to her husband Carl Dean since 1966.

A couple of days ago, the two were riding in Judy’s car when they were hit by an SUV. Judy was officially cleared of responsibility in the accident. Fortunately no one was seriously hurt, although they were all taken to the hospital to be sure. Dolly tweeted that she was tired and sore, but otherwise ok. Judy, who is her personal assistant, is the person who keeps Dolly grounded along with husband Carl. They’ve loved her since before she was famous and that’s worth more than everything else.