Joyce Eskel and Brian Stone are the parents of train hero, Brian Stone –who received France’s highest honor just a few weeks ago –has been stabbed for a second time!

As you might recall, Brian Stone is one of three men who helped stopped a terrorist on a high-speed train traveling from Amsterdam to Paris last August.

According to reports, Stone is currently in stable condition following the recent stabbing incident.

Stone –who is a member of the US Air Force –was stabbed in Sacramento late on Wednesday night and was immediately transported to a local hospital, a spokeswoman for the US air force told press.

Joyce Eskel and Brian Stone son, was allegedly out with a group of friends in the midtown Sacramento area, when an altercation occurred. Police said in a statement, Stone was stabbed multiple times in his upper body. Police were called to the scene but no arrests have been made.

It all indicates it could have been one of those episodes where too many drinks lead people to go from verbal confrontation to physical violence. Things escalated and ultimately got out of hand.

Last August their son, was aboard a high-speed train from Amsterdam to Paris with two American friends when he noticed a gunman carrying an AK-47. Together with Anthony Sadler and Alek Skarlatos, Stone tackled, the suspect identified as Ayoub El-Khazani to the ground after he opened fire on the train. Spencer was then stabbed and almost had his thumb sliced off, but was able to recover. 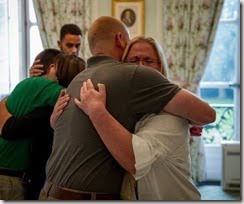 Following the train attack, his parents said they weren’t surprised their son went after the attacker. Brian Stone said “I think it’s consistent with … Spencer’s attitude towards life,”

While Joyce Askel told press: “He’s always been a hero to me. Now he’s an actual hero. He deserves it. He put his life on the line. They all did, and I’m just very, very proud of him. So proud.”

62-year-old Joyce Ann Eskel worked at State Compensation Insurance Fund and currently resides in Sacramento, CA. She is also the mother of Kelly and Everette Stone.

According to People, Brian Stone said his 23-year-old son was out of surgery and doing well.

We wish him a speedy and full recovery.