Joseph Zaccardi was until recently a struggling children’s book author who killed his family and later turned the gun on himself.

Joseph, a family man who wrote and published a number of children’s books was found dead inside his Massachusetts home. Along with him was found his wife, Deirdre Zaccardi, 40, and their three kids, 11-year-old Alexis Zaccardi and 9-year-old twins Nathaniel and Kathryn Zaccardi. The killings are believed to be the result of a murder-suicide. A clear reason for the killings is yet to be determined by authorities.

43-year-old Joseph – native of Foxborough, Massachusetts – is said to have listed himself on Facebook “unemployed and going crazy” -however in the past he also used the same platform to announce and promote the publishing of his third children’s book.
“I am proud to announce that my third children’s book, All Mixed Up, has been published and is now available to purchase on Amazon,” he wrote in 2017.
His wife Deirdre, commented on the post ‘Im so proud of you’ 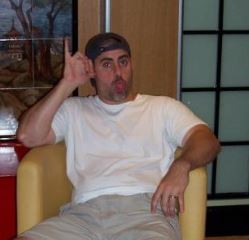 On Amazon he can be found as Joe Zaccardi, his most recent book appears to be ‘Day is Done No More Fun’ published in 2018. A list of his books also include All Mixed Up, Sammy the Once Sad Caterpillar and What Kind of Dragon Would you Be?

Joseph Zaccardi attended Fox-borough High School and later graduated from the University of Massachusetts -where he met future wife, Deirdre. On social media, the author, husband and father -described himself as teddy bear w/an old soul.

He and his wife had been married for over a decade and shared three elementary age children. Deirdre Zaccardi who also attended University of Massachusetts graduating with a degree in business management; served as the office manager of Boston marketing consulting firm EMI Strategic Marketing and had worked at the company for nearly two decades. The spouse and mom of three was supportive on her husband’s career.