Patricia Andres is the longtime wife of renowned celebrity chef, Jose Andres -who has been a mainstay in the D.C. restaurant scene for decades.

Patricia’s husband is also known to have earned the ire of president Trump by removing his restaurant from the Trump D.C. hotel.

Andrés was born in Asturias on the northern coast of Spain but studied catering in Barcelona. That was where he began to work professionally as a chef: first in the restaurant owned by Jean Louis Neichel, then at elBulli, both of which instilled in him their professionalism and creativity.
On arrival in the US, his advisor was Carmelo Bocos, El Cid restaurant in New York. Then he made it to DC to work with Rob wilder and Roberto Alvarez’s Proximo restaurants. Heading up the kitchen at Jaleo.
Mediterranean-inspired Zaytinya followed soon after and then Oyamel Cocina Mexicana. In 2003 he opened his innovative minibar by josé andrés. In 2006, José and Rob transformed Proximo restaurants into ThinkFoodGroup.

In late 2007, he signed a contract with SBE Hotel Group and designer Philippe Starck to launch SLS Hotels. The venture includes the signature destination restaurant The Bazaar by José Andrés and Saam, inside the Bazaar in Beverly Hills. The second outpost of the SLS Hotel made its debut in Miami’s South Beach in 2012. He also opened restaurants in Las Vegas. All in all, Jose oversees more than 30 restaurants nationwide.

He is also a family man, Jose Andres has been married to wife Patricia Andres for over two decades. 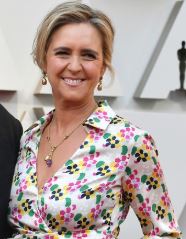 Mrs. Andres was born Patricia Fernandez de la Cruz. The 48-year-old is a native of Cadiz. The two met in Washington, D.C.
She arrived to DC because her uncle worked for the Spanish Embassy, the plan was to study English for six months but she ended up staying. She then went to Montgomery College and finished her studies at University of Maryland University College. At the time of their nuptials Patricia worked for the Spanish embassy within the commercial office.

They tied the knot in 1995 and have since welcomed three daughters. Patricia Andres is the proud mom to Carlota, 20 ; Ines, 18; and Lucia, 15. All three went to The Woods Academy in Bethesda, and Ines and Lucia now attend Stone Ridge School of the Sacred Heart, also in Bethesda. Carlota, a 2017 Stone Ridge graduate, is a sophomore at New York University.

When describing his wife, Jose said in an interview about Patricia Andres; she is the “organized and sensible person in my family” he also added she is “caring, loving and the best friend a nutjob like me can have.”