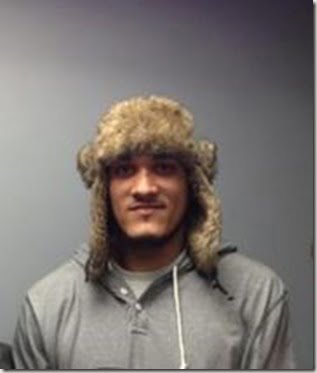 After watching in a video posted Nov. 8 to YouTube,  25-year-old Jorge Pena slapping a woman and getting into a brawl with her friends, you would never think the 6-foot-6 guy would be absolved of any wrong doing, but after taking a closer look, you realize he was the victim! Otherwise known as 8-ball jacket subway slapper, reports say he spent four-nights in jail and posted a $1000 bail but charges were dropped! In the 2-minute footage titled “Man smacks the soul out of a girl on the NY Subway” A DA spokesperson confirmed that the charges against Peña were dropped once it was clear he had acted in self-defense.

The DA’s office was able to have all of the information in front of them at an early stage to show that our client did nothing wrong and acted in self-defense, said his attorney Cary London.

Pena who is planning to sue the city over his four days spent in jail after his arrest, is originally from the Dominican Republic. And is it wasn’t for injuries he suffered ins the past, we would be speaking to a famous athlete now.

Jorge used to be a right-handed pitcher for an Oakland A’s minor-league farm, but in 2010 he decided to quit his dream of reaching the big leagues forced by injuries. Pena who is described by his lawyer as a “gentle giant” had never hit a woman before, regreting the whole thing he was willing to apologized even when his aggressors started the whole thing, he said

“A man is never supposed to hit a girl,”

Jorge works as a part time bouncer at a Lower East Side bar, he caught the attention of the hostile woman identified as Danay Howard, 21, because of his distinctive jacket. She made fun at Pena’s jacket all before using her 6-inch stiletto as a weapon! She ended up hitting Pena behind the left ear and on his face. Pena was returning from a 16-hour shift, he told media reports

“But when I saw that blood, I couldn’t take it. She attacked me like a man.

He had to stop her somehow!  The video has since gone viral, and the former pro baseball prospect regrets he wont get to use his favorite jacket anymore, the jacket in question is actually highly fashionable right now and was worn by the rapper TI in a recent music video. He said

“I love this jacket,” “But I don’t think I can wear it anymore.”