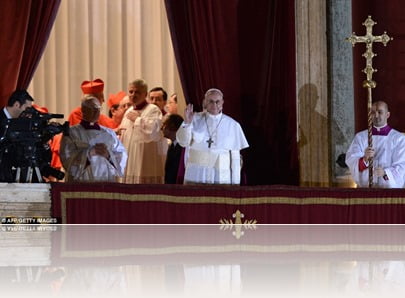 After a day of black smoke, finally we saw white smoke coming out from the Sistine Chapel chimney and it was just a matter of seconds until the new pope’s identity was going to be announced at the central balcony of St. Peter’s Basilica.

The New Pope is Pope Francis or Pope Francisco whose real name is Jorge Mario Bergoglio, he was born in Buenos Aires, Argentina on December 17, 1936. Pope Francis’s father Mario Bergoglio was an Italian railroad worker, who with his wife Regina a housewife had 4 children. He was in his 20’s when due to a long respiratory illness he lost a lung. 76-year-old Bergoglio graduated with a degree in chemistry and a  from E.T.Nº 27 formerly known as secundaria industrial EE.T.Nº 27, he also holds a licentiate in philosophy from the Colegio Máximo San José in San Miguel, in 1957 at the age of 21 he decided to become a priest, he entered the seminary of Society Of Jesus in the Buenos Aires’ neighborhood of Villa Devoto, as a novice in the Jesuit order. Archbishop Ramón José Castellano ordained him to the priesthood on December 13, 1969, Pope Francis then taught literature and psychology at the Colegio de la Inmaculada in Santa Fe, and the Colegio del Salvador in Buenos Aires. He by . He attended the Philosophical and Theological Faculty of San Miguel, a seminary in San Miguel. Bergoglio attained the position of novice master there and became professor of theology.