Alexandra Kravetz is the lovely wife of Hollywood director/director, Todd Phillips -the man behind the Batman villain origin story Joker.

Alexandra’s husband was best known for directing male-led comedies such as Old School, Road Trip, and The Hangover trilogy.
Born Todd Bunzl on December 20, 1970; the Brooklyn, New York native attended NYU Film School but dropped out before graduation. Instead, he began promoting his first documentary Hated: GG Allin & the Murder Junkies in the early 90’s -which put him on the map.
He made a name for himself with Hated: GG Allin & the Murder Junkies (1993) and latched on to the controversy surrounding the documentary ChickenHawk (1994). 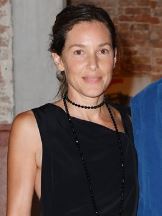 A co-creator of the New York Underground Film Festival (along with Andrew Gurland), Phillips has been described as an expert at playing the media and causing sensation.
In 2006 he quit the production of Borat after shooting the infamous rodeo/”Star Spangled Banner” scene, due to creative differences with Sacha Baron Cohen. He was however, nominated for the Academy Award for Best Adapted Screenplay.
After establishing Green Hat Films in 2008, Phillips directed and produced The Hangover, that was made for a reported $35 million and went on to become the highest-grossing R-rated comedy in 2009.
Most recent work includes the films, Due Date and War Dogs.

He and wife, Alexandra Kravetz have been together for years. Together they share at least one child.
Alexandra Kravetz was born in France. According to her IMDb, she is known for her work on Patch Adams (1998), Good Night, and Good Luck. (2005) and School for Scoundrels (2006).

The lovely brunette however, seems to have left the showbiz to start a family. She is virtually unknown though she has been photographed in red carpets next to her man.
Back in 2013, Phillips and then girlfriend, Alexandra Kravetz made headlines after it was reported he had to get a restraining order against another woman. At the time the filmmaker alleged that Juliana Shiao started texting him in spring 2011 following a “one night relationship. The texts became “increasingly aggressive and threatening,” and Phillips even claimed that Shiao had vandalized Kravetz’s car and referred to her in a threatening manner via text.