Debbie Dingell is the wife of late John Dingell -who died earlier this year and was the longest ever serving congressman.

Debbie’s husband was an iconic figure in Michigan who was admired across party lines, and was one of the most popular political figures in the state during his lifetime.

John served as a member of the United States House of Representatives from December 13, 1955, until January 3, 2015. A member of the Democratic Party, he holds the record for longest-ever serving Congressperson in American history, representing Michigan for over 59 years.
Following his retirement, Debbie now holds his seat in the House as the Representative for Michigan’s 12th congressional district since 2015. 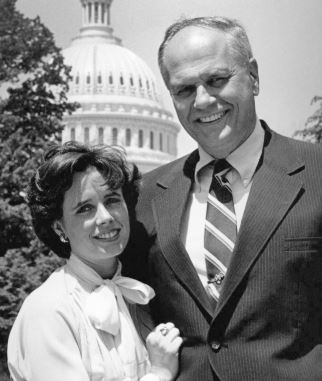 Debbie and John Dingell were married since 1981, he was 27-years her senior. They were married for 38-years. This was the second marriage for John who was first married to Helen Henebry -with whom he fathered four children.

Born Deborah Ann Insley on November 23, 1953; the Michigan native holds both a B.S.F.S. in Foreign Services and an M.S. in Liberal Studies from Georgetown University.

For more than three decades Debbie Dingell worked for General Motors Corporation, where she was President of the GM Foundation and a senior executive responsible for public affairs. Before being elected to Congress, Debbie Dingell was the Chair of the Wayne State University Board of Governors.

She is a founder and past chair of the National Women’s Health Resource Center and the Children’s Inn at the National Institutes of Health.
She has served on numerous boards related to women’s issues including the advisory boards for the NIH Panel for Women’s Research -and for that she is a recognized national advocate for women and children. She was named one of the 100 Most Influential Women in Michigan.
According to her house bio, Debbie co-hosted Detroit Public Television’s “Am I Right” and regularly served as a panelist on “Flashpoint”