Joaquin Ramirez & Roseanne Solis are one of the lucky ones that survived Sunday’s shooting at First Baptist Church –where 26 people died at the hand of Devin Kelley.

The shooting at First Baptist Church of Sutherland Springs on Sunday is the deadliest mass shooting in Texas history.

Joaquin Ramirez & Roseanne Solis, a couple married for many years and longtime residents of Texas shared their survival story saying Sunday’s service seamed just like any other day until bullets started flying across their heads.

The couple began saying one moment they were singing and praising and the next they got down, crawling under wherever they could hide. The two huddled together, playing dead.

Solis was hit in the left shoulder, and she could see the storm of bullets coming in from outside.  The storm went on for what seemed like an eternity. Around them, they saw people falling after being hit by shots.

Then, everything got real quiet for a moment and as everybody was bloodied and in shock wondering what would happen next, Joaquin Ramirez & Roseanne Solis heard a voice yelling ‘Everybody die [expletive],’ and the shooting started again. 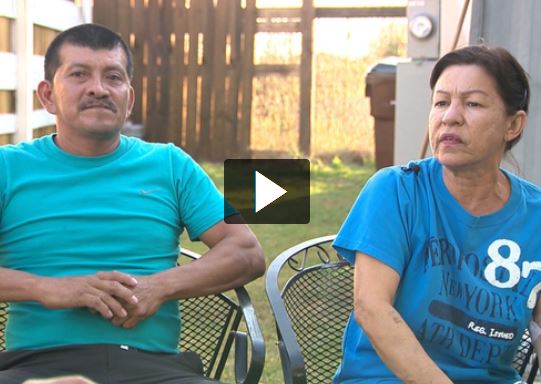 During the interview, Joaquin Ramirez explained in Spanish that Kelley, once inside –shot and killed everyone who made a noise, even babies crying. According to the couple, the gunman started with the crew in charge of the camera and audio area.

He then moved into the center aisle, toward those at the front of the stage with the music crew. Aisle by aisle, he continued to shoot. At some point Ramirez –who remembers praying for his life –managed to call 911. He was injured by shrapnel.

The couple didn’t wait for an ambulance to arrive and instead drove themselves to the hospital to treat their injuries. They have since been released and are both recovering at home.

Joaquin’s wife, Mrs. Solis firmly believes The Lord save them –and though her faith remains strong she revealed it will take a long time before she can return to the church again.