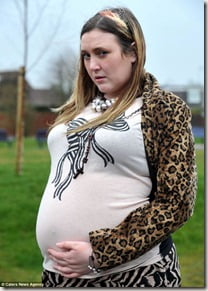 A rare bowel condition has had 33-year-old Joanne Turton looking eight months pregnant for 15 years! The disorder has left her with a severely bloated her stomach since she was 18.

“Ever since I’ve had this condition, I’ve had a bloated stomach and it looks like I am eight months pregnant.” Turton said, “It hurts all the time and I get stabbing pains in my side. It has affected me all my life and means I can’t go out and socialize with friends like a normal person.”

After many failed attempts at finding a cure, a pacemaker was tried and improved her bowel movements. The operation is known as a Gastric Electrical Stimulation (GES). According to the University of California San Francisco, a GES involves surgically implanting a pacemaker-type device in the abdomen then pulsates electrical stimulations to nerves, smoothing the lower muscles of the stomach. Joanne said:

“When I had the trial they put it on the outside of my body with a tube leading down my throat. It instantly made me feel better and for the first time, I felt normal.”

But just when she finally thought she would find relief, her operation, scheduled for April 9 at Castle Hill Hospital in England, was cancelled. She tried phoning her own GP and her surgeon to find out what had happened.

“I was so excited to finally be getting the operation,” Turton said. “It was a relief knowing there was finally a light at the end of the tunnel. Now I’ve been left in limbo and I don’t know what is happening.”

The NHS Hull Clinical commissioning Group, CCG, offered to pay for the operation, but she still has no word on when or where an operation will take place. The spokesperson for the group said that the operation is accredited in very few districts of the United Kingdom, so it will have to take place outside Castle Hill Hospital.

“The funding for Miss Turton’s treatment was approved by Hull CCG Exceptional Treatment Panel and this funding remains in place,” the spokesperson said. “The highly specialized nature of the gastric electrical stimulation procedure means that few centers in the country are accredited to undertake it. Hull and East Yorkshire Hospitals NHS Trust is not one of these accredited centers. It is extremely regrettable that the communication with Miss Turton did not make it clear that her procedure would need to be carried out with an accredited provider. This is a matter we are urgently reviewing internally and in conjunction with Hull and East Yorkshire Hospitals NHS Trust. In the meantime, we would encourage Miss Turton to either contact her doctor or the CCG directly to discuss this matter further.”

Joanne Turton was born on July 2, 1979, and lives in Kingston Upon Hull. She graduated in 1995 from David Lister School and afterwards from Hull University in 2000. She works as “self agent” according to her Facebook profile. Turton has a 5-year-old daughter named Kaitlin.