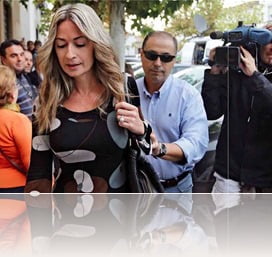 Meet Jesus Atahanero he is the husband of Olvido Hormigos the former Spanish Socialist politician with the political party PSOE that quit her job after a homemade video of  her topless and pleasuring herself was leaked last year.

Those days are in the past, speaking of shame and pain that is because nobody can’t never forget  when a *** video of a famous personality gets leaked online, and media took advantage of the situation and put Hormigos in the Spanish version of Splash “Mira Quien salta, and Interviu Magazine had he topless in their  issue.

42-year-old Olvido Hormigos Carpio from Los Yebanes in Toledo, Spain was the Socialist councilor  in Los Yébenes until last year, when the infamous homemade tape  that she recorded with her cell phone was leaked. According to Olvido the tape was meant to be for Carlos Sanchez Ramirez the goalkeeper from Seville with CD Los Yebenes who she was dated at the time. She accused him, the city mayor Pedro Acevedo of leaking the tape..

All I want is that ‘the footballer’, the recipient of the video, who I dated for three months and  that today walks through the town as if nothing happened, pays for what he did, People think I’m made of ice, but it was horrible, but I had to get on with my life,”
“My husband has forgiven me but to hurt the people you love is very hard”

Like Olvido Hormigos, her partner in the affair Carlos Sanchez the 28-year-old goalkeeper cheated on his living girlfriend, he was dating Ana from Los Yebenes his longtime girlfriend who was then  accused of leaking the tape. 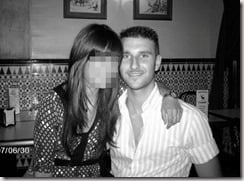 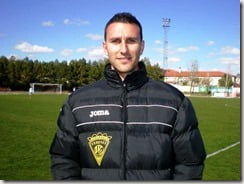 and since Olvido’s husband has forgiven her, would you like to know about Hormigos husband Jesus Atahanero?

Mr. Atahanero talked briefly to media about his wife’s affair and tape..

Olvido is shattered, waiting for this to happen, and I’m screwed and very bad “.
“I ask you to please leave me alone, because I will not make any statement. Please do not follow me and stop harassing me,  that I have orders to call the Guardia Civil if you continue to do so, so please leave me”
Oblivion is devastated, everyone is broken, “he said.
“I pray for all, please understand a lot. Thanks for everything, that will be all.

50-year-old Jesus Atahanero Martin a carpenter and the owner of his own carpentry Carpinteria Atahonero S. L in Los Yebenes has been married to Hormigos for 15 years, they have two sons together 14-year-old Mario and 12-year-old Javier.