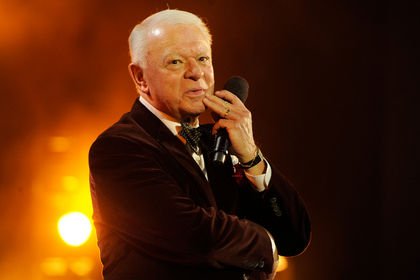 Jerry Sharell, well known music industry executive, was held hostage for hours by his girl friend’s ex husband and brutally slashed with a machete. Behnam Vasseghi arrived at Sharell’s home in the Woodland Hills area early Sunday morning on a motorcycle, carrying a machete and a bouquet of flowers. After taking Jerry and Gigi Marie Vasseghi hostage, he began to ask Sharell questions, and if he didn’t like the answers he would slash him in the neck.

After  three to five hours of this ordeal Gigi was able to get away and call the police. When they arrived, they told 57 year old Behnam to put down the machete, which he did, but not before slashing his wrists. He wanted his ex wife to see him die, according to Sgt. Jeff Nuttall. He is listed in stable condition and is expected to face attempted murder charges on Tuesday.

Gigi was also injured, treated at the hospital and released. Jerry Sharell is listed as stable and expected to make a full recovery. He currently hosts Sundays With Sinatra on Los Angeles radio station KJAZZ.

Jerry is originally from Farrell, Pennsylvania and graduated from Kent State University. He started in the record business as a promotion representative for Mercury Records in Cleveland. He has three children and two grandchildren.  We are hoping he has a speedy recovery from this senseless attack.