Jenny Shimizu is an actress and model best known for her relationship with actress Angelina Jolie.

The Japanese-American model, grew up in San Jose, Calif. She actually started off as a mechanic.

Shimizu born June 16, 1967 defied the typically image worshiped by the modeling industry. She does not fit the tall, blonde, rail-thin beauty type.

However in 1994, Out placed Shimizu on the Out 100 list. Achievements continued to follow, but no matter how much she accomplishes what people still can get enough of her much publicized love life. Her sexuality and relationship with both Madonna and Angelina Jolie raised eye brows in Hollywood and around the world.

Angelina famously stated in a 1997 interview that she ‘would probably have married’ Jenny if she hadn’t instead wed first husband Jonny Lee Miller. Angelina and Jenny, embarked on a ******* love affair after they starred together in Foxfire.
For Jenny, her first marriage came in the form of model Rebecca Loos. The two tied the knot in 2005 to protest against American laws on gay marriage.

Jenny Shimizu has been married for over a year to Michelle Harper. They met in 2012 at a party and married in New York in 2014, just days after Angelina Jolie secretly married Brad Pitt in France. 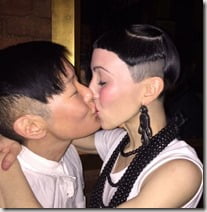 Jenny Shimizu has been photographed by some of the world’s biggest photographers, including Bruce Weber, Richard Avedon, and Michel Comte, and she’s been featured in ads for Donna Karan, Jean Paul Gaultier, and Thierry Muegler.

Most recently she’s reentered the spotlight as a judge on Bravo’s Make Me a Supermodel. She has also designed a line of T-shirts, each with a graphic with a personal story behind it.

Recent reports reveal, Shimizu actually has a violent past. According to RadarOnline, in 1997 she pleaded guilty to misdemeanor possession of a weapon with intent to assault and felony inflicting visible injury on a cohabitant or spouse. At the time, records show, Shimizu was sharing apartments with long-time girlfriend Maria Luisa Mosquera in Los Angeles and New York.

In 2004, a judge ruled that Shimizu had “appeared to have complied with all terms and conditions of probation.”