Jenny Lumet is a Hollywood screenwriter and most recently, the latest to point her finger at Hip Hop icon, Russell Simmons.

Jenny now 50, revealed she was sexually assaulted in 1991 by Simmons. The former actress wrote in an open letter Simmons’ ‘used his size to force her into the elevator of his apartment building.’

Find about more about Jenny Lumet in her top facts below. 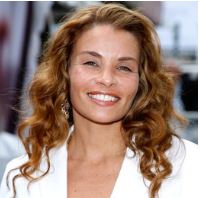 #1 Her father was a renowned Hollywood producer and director

Jenny Lumet is the daughter of filmmaker Sidney Lumet and his third wife, Gail Jones. Sidney Arthur Lumet had over 50 films to his credit when he died in 2011 aged 86. A number of his films were nominated for various Oscars. Sidney was acclaimed for movies like “Twelve Angry Men” and “Serpico.”

#3 Jenny Lumet is an actress and wirter

Jenny began her career as an actress and then became a screenwriter. She is best known for being the author of ‘Rachel, Getting Married.’ Other work includes: The Center Cannot Hold, The Language of Flowers, Remember Me, Bobbie Sue, Honneymoon with Harry. She authored the pilots The Weissmans of Westport, Crazytown, and The Beresfords.   She has written several other original screenplays including Kingdom of Loui and Sambo.

Despite having been raised among two icons, Jenny enjoys her privacy living with her husband and their child and a dog.

#6 She has worked as a teacher

#7 She has been married twice

Lumet was first married in 1994, to first husband actor, Bobby Cannavale. The two were divorced a decade later in 2004. Four years later in 2008, she became a wife to second husband artist, Alexander Weinstein.

#8 She is the mother of two children

Jenny Lumet is the proud mother of two children, including Jake Cannavale –born from her first marriage. She and second husband, Alex Weinstein are the parents of one daughter.

#9 Her eldest son is an actor

Son Jake has followed into his parents footsteps. Born May 1, 1995, the NY native appeared on Broadway in 2015 in the comedy Fish in the Dark. He also appeared on the TV series, Nurse Jackie.

She also serves on the Council of the Writers Guild of America East. She generated and chairs the WGAE’s first Diversity Caucus.