E! reported Farley and De Laurentiis first met in 2013 when he was meant to produce a show for her and Bobby Flay; and according to Giada’s rep she and Farley became romantically involved recently, more specifically they began dating this past August.

That’s great and all until…it’s been revealed Farley is still legally married to his ex-wife, Jennifer Giamo.

To be completely fair to Farley, documents in New York Supreme Court do reveal Farley filed for a divorce on March 30. So if we put two and two together –and assuming Giada’s rep is correct –the 45-year-old chef had nothing to do with Shane’s divorce.

By now, there’s nothing more that we can say about the pair, but we can tell you what we know so far on Jennifer Giamo.

Jennifer’s lawyer, Barry S. Guaglardi, told Fox News, on Wednesday, “My client is devastated by what she has learned through the tabloids . . . ‘Hurtful’ would be a mild characterization.” A source said of the divorce proceeding, “They’re just in the middle of it.” 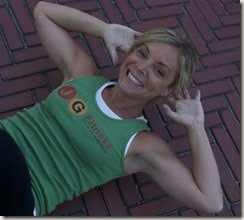 In 2010 she appeared on The Rachel Ray show. The 44-year-old is an NSCA Certified Personal Trainer and also holds a Master’s degree in Nutrition Education.

Her page states, her experience in the field spans over 15 years; working with corporate clients such as IBM, J&J, Schering-Plough and Dow Jones.  Her career in the health and fitness industry began as a Nutrition Consultant and evolved into managing multiple Corporate Fitness Centers throughout New York City and the Northeast region.

It is not clear if Jennifer Giamo and Shane Farley had any children together or what the exact cause of their split was.

According to Financial Express, Farley is the executive producer of ‘FabLife’ and the former producer of ‘The Rachael Ray Show.” He is a TV award winning producer, after collecting several Emmys for his work on the Rachel Ray Show.

Do you think Giada knew her new man was still hitched? Would this be a deal breaker?