Jennifer Cora is the wife of professional chef, Catherine Ann Cora, better known as “Cat” Cora. Recent reports indicate Cat and her wife of 2-years succumbed to the celebrity divorce trend going on in the past months.

Jennifer and Cat tied the knot in 2013 but have been together for over a decade. They share 4 children in total; 3 of whom Jennifer gave birth to and 1 who was carried by Cat. It  is unclear why they decided to end their union.

Jennifer Cora might not be as famous as her soon-to-be-ex-wife. 48-year-old Cat Cora is one of the original American Iron Chefs. In 2005, Cat Cora made television history on Iron Chef America as the first female Iron Chef. Cora is also known for co-hosting Bravo’s Around the World in 80 Plates.

She was recently a guest judge on “Cutthroat Kitchen” and also keeps real busy overseeing 4 restaurants.

She is the author of books, Cat Cora’s Kitchen and Cooking from the Hip. She is also the founder of the charity Chefs for Humanity. 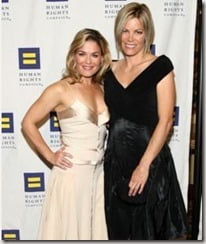 Jennifer and Cat have four sons. According to a press release from Cat Cora, Jennifer carried their first son, who she conceived through artificial insemination. Their second son was carried to term by Jennifer, but this time using Cat’s embryo.

Cat and Jennifer were both pregnant in 2009, for their third and fourth child. Cat’s pregnancy was the result of in-vitro fertilization with Jennifer’s embryo. Jennifer was implanted with embryos from from both women, so the biological mother is unknown. All children have the same sperm donor. 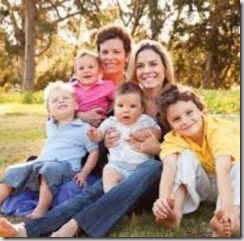 While Cat was busy doing her thing, Jennifer Cora was the one in charge at home of their four boys.

Jennifer cora met Cat in 1999 while skiing in Lake Tahoe. Cat described it as an “instant click.”

At the time Jennifer worked as a nanny and had to travel abroad with the family. When she came back she and Cat moved in together and had a ceremony two years later.

During an interview in 2010, Cora talked wonders about Jennifer saying how well they complemented by taking care of their four boys and also said Jennifer was a great cook.