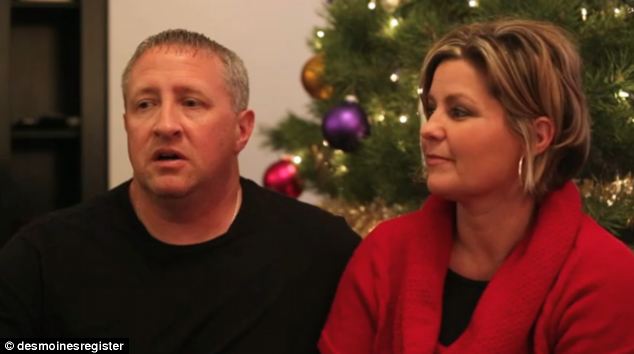 This is a story of true, real love.

Brenda and David Schmitz were married in 2007. They had one son together, Max, now four. She had one son from a previous relationship, Carter 21, and he had two sons, Josh 17, and Justin 14.

Then Brenda was diagnosed with ovarian cancer. She passed away in 2011, but not before preparing a gift for her husband. She wrote a letter to Des Moines, Iowa’s Star 102.5 Christmas Wish Program, sent it to a special friend instructing her to send it when her husband had found someone to share his life with again. She had told her husband before she died that she wanted him to live a full life after she was gone. She only had one request: “Just make sure they love Max and the boys as much as I do.”

This past August, David became engaged to Jayne Abraham. Jayne has a daughter Madison 15 and a son Sam 13.  So Brenda’s friend, who has remained anonymous, sent the letter to the radio station. In her letter she asked for three wishes:

The first wish: For something that would pamper David’s new partner. “She deserves it,” Brenda wrote. “Being a step-mother to all those boys, and especially giving lil’ Max a ‘mother’s love’ that only she can give. Make her smile and know her efforts are truly appreciated from me.

The second wish: The second wish was that her family be taken on a magical trip, somewhere they could all enjoy and make memories to last a lifetime.

Her third wish: for the nurses and doctors who took care of her in the cancer unit at Mercy Medical Center. ‘A night out full of drinks, food and fun for all they do every day for the cancer patients they encounter.’

The station told David all three of Brenda’s wishes will be granted, with help from sponsors.

Brenda was a person full of love, and compassion. A very special person. We wish David and Jayne much happiness in their married life together, and always remember Brenda with affection