Javon Boutte is the son of legendary musician, Bill Bushwick, real name Richard Stephen Shaw -who passed over the weekend, he was 52-years-old.

Javon’s father is well known as a member of the Houston rap trio Geto Boys.

He first performed under the moniker Little Billy, joining the Geto Boys in 1986 following a stint as the group’s dancer. As Bushwick Bill, the rapper became an important member of the group whose classic lineup – Bushwick Bill, Willie D and Scarface – influenced both southern hip-hop and the horrorcore genre.

The group was instantly controversial for its graphic lyrics which made radio airplay almost impossible. Their 1991 album “Can’t Be Stopped” still went platinum, though, on the strength of classics like, “Mind Playing Tricks On Me.”

According to reports, Bill died in Houston surrounded by family. He had been diagnosed with stage 4 pancreatic cancer in February. 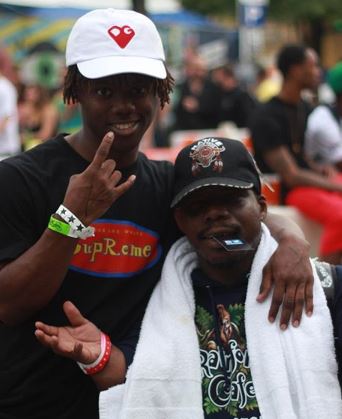 Rumors about his death had been circulating since early on Sunday which prompted his publicist to say that he was still alive and ‘fighting for his life’ but by Sunday night it was his son, Javon Boutte who confirmed Bill’s passing to TMZ saying his father’s final words were, “I will love you forever.”

The Jamaica-born Shaw was born with dwarfism on December 8, 1966; he was listed at 3 feet 8 -inches tall. Bill was also known for accidentally shooting himself in the eye back in 1991 during an argument with his girlfriend -he ended up losing his right eye.

Bushwick appeared on seven of the Geto Boys’ eight albums, from their 1988 debut Making Trouble to their 2005 reunion LP The Foundation, and contributed verses to the trio’s hits like “Mind Playing Tricks on Me,” “**** It Feels Good to Be a Gangsta” and “The World Is a Ghetto.”