Jane Rosenberg is the courtroom artist who’s sketch of NFL star Tom Brady has caused her to receive some negative comments! Among the headlines we found:

“Tom Brady’s face melted at the DeflateGate hearing, according to this courtroom sketch,” SB Nation surmised.

“It looks like Brady’s face was put in one of those machines that crushes cars,” USA Today said.

Speaking about her work of Brady, she said during a phone interview:

I apologize to Tom Brady for not making him as good-looking as he is.

Ms. Rosenberg was hired to attend Brady’s hearing –who is appealing a four-game suspension for his role in the deflation of footballs used in the AFC championship game in January –she elaborated saying drawing celebrities is a difficult task because people already have a certain image of them in their heads adding she had a short amount of time to work. 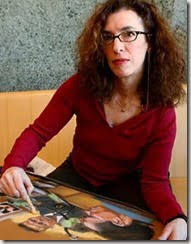 According to her website, she is a ‘New York City Plein Air Painter and Courtroom Artist.’

Jane has been a sketch artist for 35 years, depicting a litany of public figures including Woody Allen, Martha Stewart, Bill Cosby and John Gotti.

The Brooklyn native began painting and drawing at an early age. She attended State University College at Buffalo where she received a Bachelor of Arts degree in fine art. She continued her artistic training in New York City at The Art Students’ League of New York and The National Academy of Art and Design.

According to her bio, it was in the early 1980’s –during a period of high speed portrait painting that she began going to the courts in Manhattan to sketch. Rosenberg was quickly picked up by NBC, the station had no artist and they showed her sketches of a high profile murder trial that same night.

She would be sent all over the country to cover trials, transported by plane, helicopter or chauffeur.

Throughout her busy courtroom career, Rosenberg continued to paint both in the studio and en plein air. She is a signature member of the New York Plein Air Painters. Her work has been seen on CBS, ABC, NBC, CNN and Fox News, and is in the permanent collection of The Museum of Television and Radio in New York.

The 59-year-old Jane Rosenberg resides in Manhattan with her family, relatives include Sarah, James and Kate Rosenberg.