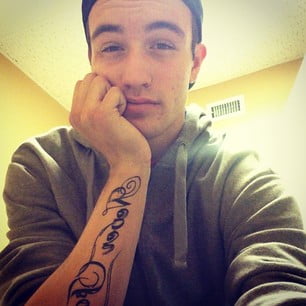 Jameson Witty, your typical teenage boy in love with fast cars? Maybe not so typical. As we can see from his instagram profile, he loves fast cars and risk taking. But he might have taken a bigger risk than he thought when he allegedly stole parts from the wreckage of the Porche that Paul Walker and Roger Rodas died in.

The theft happened on Saturday night as the 2005 Porche Carrera was being towed from the site of the accident, according to the Los Angeles County sheriff’s official.

The investigation led detectives to Jameson Witty, 18, who was arrested at his home in Los Angeles and was being held on $22,0000 bail, the Sheriff’s Department said in a statement. A second suspect, a 25-year-old man whose name has not been released, was outside California and arranging to surrender, the statement said.

Witnesses told investigators that they saw someone driving behind the tow truck that was hauling away wreckage.Detectives identified the two suspects, and while serving a search warrant at a home in Canyon Country, a community north of Los Angeles, they found a red T-top roof panel from the Porsche, sheriff’s officials said. They would not say what led them to the two men or what evidence they had against them.

Jameson had also sent out a tribute to Walker and Rodas writing that on Dec. 28 there would be a car meet at the crash site to “celebrate the lives of Paul Walker and Roger Rodas” They would also be raising money to donate to Paul’s charity.

Was this done for love or for money? Let us know what you think.