Jacob Glanville is a scientist who appears on a Netflix series and who claims he and his team have found a cure for the deadly coronavirus also known as Covid19.

Jacob Glanville who is featured on Netflix’s documentary Pandemic, is according to a number of profiles, an entrepreneur, inventor and computational immuno-engineer.
Glanville, based in San Francisco, announced that the potential coronavirus cure -will now be tested by the US military.

Glanville said during an interview that back in 2002, he and his team successfully took five antibodies that were determined to bind and neutralize, block and stop the SARS virus. He and his team evolved those antibodies and according to him they now ‘very vigorously block and stop the SARS-CoV-2 [COVID-19] virus as well.’
He added that the new antibody therapy is a ‘candidate cure’ for the deadly bug that has swept pretty much the entire globe.
Before we get our hopes up, there is a downside. Glanville also said the drug would work ‘sort of like a short-term vaccine because these antibodies will only protect recipients for 8 to 10 weeks, unlike a true vaccine.’ 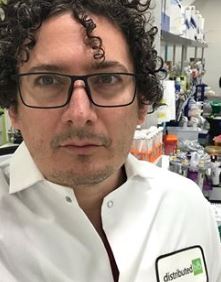 According to his LinkedIn, Jacob Glanville is the Co-founder, CEO and president at Distributed Bio, Inc.; where he and his teams apply computationally-guided immunoengineering methods to enable a new generation of monoclonal antibody discovery and universal vaccine design.

He was previously a principal scientist at Pfizer and also worked as a Bioinformatics Technician for Berkeley Phylogenomics Group.
Jacob Glanville attended University of California, Berkeley from 2002 until 2006 -where he obatined a Bachelor’s degree in MCB, Genetics Genomics and Development. He also holds a PhD in Computational and Systems Immunology from Stanford University.
In addition, he is a Stanford University Scientific Advisory Committee member for the Sean Parker Center for Allergy and Asthma Research, a Scientific Advisory Board member for the University of San Francisco’s Biotechnology program and a repeat Gates Foundation/Stanford University Computational and Systems Immunology Grant Recipient.
Jacob Glanville who also goes by Jake, is a married to Erin Flynn and together are the parents of a toddler daughter.