Ladan Ahmed has been identified as the newest and current wife of Ahmed Hirsi -who was once married to politician, Ilhan Omar.

Ladan Ahmed and Ahmed Hirsi just became husband and wife and less than two months ago he was still married to Omar. The Minnesota legislator who is in a relationship with lover, Tim Mynett; filed for divorce from Hirsi and their divorce was granted on November 5.
To make matters a bit more complicated it just so happens that Ahmed’s new bride used to work closely to his ex-wife. New wife, Ladan Ahmed is a nurse who according to reports, is Somali and worked on Ilhan Omar’s election campaign.

Ahmed Hirsi and Ilhan Omar had an unconventional story, the two became engaged in 2002 but never actually walked the isle at that time. Instead, they welcomed two children and went their separate ways around 2008.
During that time, Ilhan Omar tied the knot to another Ahmed. She and British Ahmed Nur Said Elmi divorced in 2011 –the same year she and Ahmed Hirsi reconciled.
Omar and Hirsi welcomed their third child in 2012 and she and British Ahmed were legally divorced in 2017. Finally in 2018, she and Ahmed Hirsi were able to get married only to divorce in 2019. 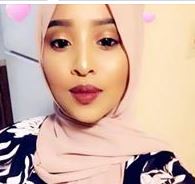 Hirsi who describes himself as a ‘father, husband and activist’ -served as Senior Policy Aide by Minneapolis City Council Member Alondra Cano.

Hirsi also worked for St. Paul College helping students with financial aid and registration issues. Previously, he worked as a banker for Wells Fargo for 11 years. Since May 2016, Hirsi has been running his own business, New American Financial Literacy, which advises immigrant communities about homebuying, banking, entrepreneurship and taxes.

Back to his new wife, Ladan Ahmed -is a pediatric nurse. On her social media she states that she is from Mogadishu, Banadir, Somalia and lives in Minneapolis, Minnesota.
According to the Daily Mail, the happy couple are now on honeymoon in Saudi Arabia and made a pilgrimage to Mecca.