Rapper Hazel-E boyfriend, comedian Katt Williams, is being accused of pointing a gun to several women! Accoridng to updated media reports, the embattled actor and rapper, reportedly pointed a gun to five women.

Williams was involved in an incident in which a group of women spotted him and approached him to take a picture with the 44-year-old artist, whose real name is Micah Williams.

According to one of the women, Williams agreed to the photo but got angry when one of them began filming him. He proceeded to fight the women and pointed a gun at the group. Reports also say, his entourage and security team took the women’s cellphones.

Now the group of women are fighting back and saying Williams and his staff stole their cellphones. The incident took place on Sunday and and police arrived but made no arrests.

According to Williams version, the women started harassing, filming and taking pictures of him without his consent. They then “became irate” and snatched a chain from his neck, which led Williams to start a fight with the group, according to the report.

Katt was arrested Monday after getting involved in a second incident. He was taken under a battery charge in Georgia after a Gainesville store employee told police Williams punched him during an argument.

Born in Cincinnati, Ohio and raised in Dayton, Katt Williams is widely recognized for his permed hair as he is for his animated performances and quick wit. He has become a common face on the BET Network, with appearances on shows such as Comic View, Rip the Runway, Black Carpet, 106th & Park, The BET Awards and BET Comedy Awards.

He is also known for his role as ‘Money Mike’ in the hit New Line movie Friday After Next.

Katt is the father of several children. He has adopted at least seven and has one biological son. 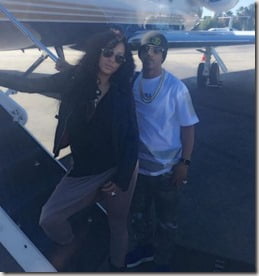 You’ve probably seen VH1 TV Star & Rapstress Hazel E around. The “Love And Hip Hop: Hollywood” star has been dating Katt Williams since 2014. The couple briefly broke up in 2015 but got back together about 8-months ago.

Hazel E was born April 25, 1980 in Ohio. According to her Facebook page, she grew up heavily influenced by pop icons like TLC, Salt-n-Pepa, Madonna, Boy George.

She is a graduated from Southwest Texas State University. After college, she moved to Hollywood, CA where she pursued an acting career. Soon after, a door to the entertainment industry was opened when she took on the opportunity to work in entertainment publicity.

Before appearing on VH1, Hazel E, worked as a publicist for major talent, including Gnarls Barkley, Tank, and Soulja Boy.

Learning the ins and outs of the business she then gained confidence to do her own thing. The sometimes blonde, is also a rapper and has released a number of mixtapes and EPs. In 2009 she released her debut mixtape “Shoe Fetish” followed by 2011 “Diary of a Valley Girl.”

While being a cast member on the hit VH1 reality series Love and Hip Hip: Hollywood –she became known as the girlfriend of Yung Berg.