Kelly Cervantes is the lovely wife of stage and screen actor, Miguel Cervantes -known for his work in a number of Broadway productions.

Kelly’s husband is best-known for his role as Alexander Hamilton in Hamilton at the Chicago PrivateBank Theater. The actor graduated from Emerson College with a BFA in Musical Theater and has additional training in singing, ballet, tap, and jazz.

Cervantes has acted on Broadway in If/Then, American Idiot, and 25th Annual…Spelling Bee. Additional theater credits include Giant, Tails, Henry and Mudge, and more.
On the big screen, his work includes The Greatest, N.B.T., and Tramps. He has also appeared on television shows such as Person of Interest, Braindead, Madame Secretary, Royal Pains, The Blacklist, and All My Children. 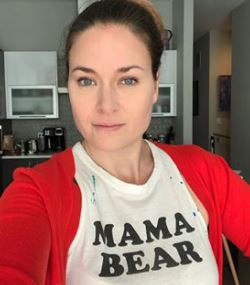 Cervantes has been married to pretty wife Kelly for several years. The couple recently shared the heartbreaking passing of their toddler daughter, Adelaide Grace. The 4-year-old suffered from “a severe form of childhood epilepsy” -Together they also share 7-year-old son, Jackson.

Kelly was born in St. Louis, MO. She attended Northeastern University in Boston where she received a Bachelor of Arts in Communication Studies with concentrations in Organizational Communication and Public Speech.
After graduation, she lived in NY where she worked as a commercial, television and film actress.
She later worked for restaurant, Riverpark -selling and coordinating in-house and catered events.

In 2016, Kelly Cervantes and her family made the move to Chicago and she left her job to take care of Adelaide full time.
She currently runs her own blog where she reveals her journey parenting a special needs child. In addition, she hosts a podcast and is a board member pf the non-profit, Citizens United for Research in Epilepsy (CURE). Kelly is also active in organizing fundraising campaigns, speaking at epilepsy events across the country, writing her blog “Inchstones”, and hosting CURE’s podcast “Seizing Life”