Derry Noyes is the longtime wife of veteran power lawyer Greg Craig –who served in top counsel positions in both the Clinton and Obama White Houses.

Derry’s 74-year-old husband has been indicted in charges connected to Mueller probe. The prominent Democratic attorney has been charged with false statements and concealing material information in connection with work he performed for Ukraine circa 2012. He becomes the highest-profile Democrat to be indicted in a matter stemming from Mueller’s work. 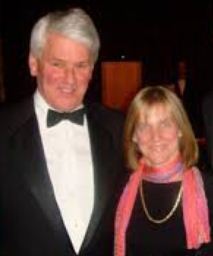 In 2008 he was named Foreign policy adviser to then presidential candidate Barack Obama and later as White House Counsel to the president. Shortly after leaving the White House counsel job under Obama, he joined top law firm Skadden, Arps, Slate, Meagher & Flom LLP.

He’s been married to Derry for decades and together are the proud parents of five adult children sons Williams and James; and daughters Mary, Eliza (Ziza) and Margaret (Maggie).

She and Greg wedded in Martha’s Vineyard in 1974 after one year of dating. Derry’s father is Eliot Noyes, the noted industrial designer.

Derry Noyes is a graphic designer by profession. She attended Yale University School of Law and lists herself on LinkedIn, as an independent graphic design professional. In addition, she also studied at The Putney School and Hampshire College.

She runs Noyes Graphics, a business which designs stamps for the Postal Service. Derry who serves as the art director is a longtime resident of Washington. The spouse and mother of five was in a bit of a pickle when in 2009 it was reported she did not have the proper paperwork to run her business.