Maureen Hunter is the longtime wife of lyricist, singer-songwriter, translator, and poet Robert Hunter -best known for writing many of the Grateful Dead’s best regarded songs.

Maureen’s multi talented husband died at age 78 at his home reports say. His family confirmed the sad news saying Maureen was by his side holding his hand. The two were married for 37-years.
In addition to Maureen, he is survived by a daughter, Kate Hunter; a stepdaughter, Lotte; and several grandchildren.

Robert Hunter was born in California on June 23, 1941. In 1961 he met Grateful Dead’s frontman Jerry Garcia.
He wrote most of the Dead’s songs with Garcia and was renowned for bringing a literary sensibility to the band’s songs, in collaborations that included their biggest radio and video hit, “Touch of Grey,” as well as classics like “Casey Jones,” “Dark Star,” “Box of Rain,” “Uncle John’s Band,” “Sugar Magnolia,” “Brokedown Palace” and “Friend of the Devil.”
In 2013, the Americana Music Association gave Hunter its lifetime achievement award for songwriting. In 2015, he was inducted into the Songwriters Hall of Fame along with the late Garcia. 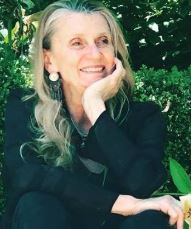 Hunter released or recorded a dozen solo albums; he also issued a series of books that included annotated volumes of Dead lyrics and translations of the work of Rainer Maria Rilke as well as his own poems.

Born on June 2nd, 1947 -Maureen is a Worcestershire, England native also made a career in the arts. She was trained in the mid-sixties at the Gloucester Art School and exhibited in numerous galleries in the West of England. A younger contemporary of the local English Ruralist movement, she cites its aesthetic of painting as her major formative influence.
She relocated to California in 1982 and her work has been exhibited at San Francisco’s infamous Big Heart City. According to a profile, Maureen pursued a varied graphics career, including numerous album and book covers. She also works extensively in block printing.
Her most notable works in that medium include the cover for Anne Waldman’s collected works Kill or Cure (Penguin Poets), as well as the cover for her husband Grateful Dead lyricist Robert Hunter’s collected lyric book A Box of Rain.