Laura Leigh Usher is the lovely wife of Canadian musician, Gord Downie –who tragically lost his battle to brain cancer at 53.

Downie, best known as the lead singer of legendary Canadian rock band The Tragically Hip, was also a writer and occasional actor. Aside from his work with the band, Gord also released several solo albums.

Born, Gordon Edgar Downie on February 6, 1964; the Ontario native and his band became giants in the Canadian music industry though in the U.S. weren’t as popular.

Downie was a founding member of the Tragically Hip, which he formed in 1984 with Gord Sinclair and Rob Baker. Their first studio album, Up to Here, arrived in 1989.

In the final year of his life, he released a solo album and graphic novel titled The Secret Path, inspired by the true story of an indigenous boy who died while trying to escape a residential school.

Gord had been diagnosed with an incurable glioblastoma in May 2016. Shortly after Downie announced his cancer diagnosis last year, the band went on a sold-out nationwide summer tour, which helped raise C$1m ($800,000; £600,000) for brain cancer research. 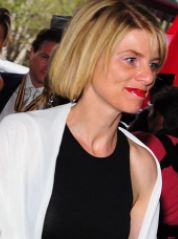 The tour culminated in a final show in Kingston, Ontario, the band’s hometown, that was broadcast live across the country. Earlier this year, he was appointed to the Order of Canada for his work with First Nations people.

He is survived by his wife, Laura Leigh Usher and their four children. The couple is known to keep their personal life out of the public eye.

Laura Leigh Usher also had her own battle with cancer. Gord revealed during an interview to George Stroumboulopoulos in late 2012 that his wife was once diagnosed with breast cancer.

Thankfully, Laura Leigh Usher recovered. The Huffington Post notes, her battle had a major influence on the band’s 12th studio album “Now for Plan A,” featuring the song “The Lookahead.”

Several outlets reported, Laura Leigh and Gord had been separated for a while. The couple is said to have split sometime before he was diagnosed with cancer last year.

Laura and Gord were separated sometime in 2015, they were together for 23-years.