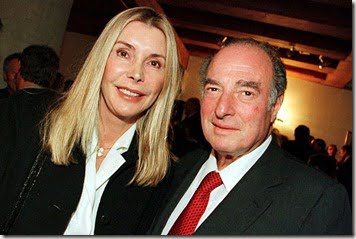 78-year-old Marc Rich, founder of the commodities trading giant Glencore International, died due to a brain stroke on Wednesday in Lucerne, Switzerland. He is survived by his wife Gisela Rich and two daughters, Ilona Schacter-Rich and Danielle Kilstock Rich.

Marc Rich is expected to be buried in Israel on Thursday.

Rich caused controversy and was charged in early 1980’s with tax evasion and illegally trading with Iran. He was one of the country’s most famous fugitives for the next two decades, and he eventually received a pardon from President Bill Clinton on his last day in office in early 2001.

The billionaire first married songwriter and heiress Denise Eisenberg in 1966. The couple had three children but one of their daughters died.

Marc Rich was taking an interest in a blonde called Gisela Rossi, a widow who was almost 20 years younger than him. Marc and Denise then divorced in 1996 but she continues to use the name Denise Rich. There was a report that she received $300 million in her divorce settlement.

Gisela and Marc married in 1998 and divorced in 2005. Reportedly, Rich romanced her in Switzerland. They lived in Villa Rosa, a huge mansion overlooking Lake Lucerne in the Swiss hamlet of Meggen.

“In the beginning we had a fantastic relationship,” Marc says. “Our love was fulfilling and very intimately, I wish we loved each other forever, but I could not.” He looks at his daughters. “It is a shame and I’m sad that the marriage with Gisela failed.”

Gisela Rossi, later named Gisela Rossi Rich, is originally from Munich, Germany. She was the widow of a German-Italian businessman and the mother of two young boys. Reportedly, Gisela is a book editor.