Joe’s wife is a Golden Globe Award winner actress who recently got into trouble for singing on her Instagram. According to reports, the 35-year-old said a racial slur while singing the Fugees’ song, “Ready or Not,” -she has since apologized for reciting the lyrics. At least we know that her man, Joe has her back.

Joe and Gina have only been married for a few months, the couple tied the knot in May this year after getting engaged in 2018.
Joe who is also in the industry, met Gina in 2016 when he played a stripper on the CW drama Jane the Virgin. The two hit it off and started dating soon after. The couple announced their engagement in 2018 and were married on May 4, 2019.

He appears in the episode “Chapter Thirty-Nine” as a Don Quixote impersonator/stripper who comes to perform for Jane as a bachelorette gift at a very inopportune time. He also appeared in season 3 as the same character this time impersonating Prince Charming for Jane’s mom Xiomara’s bachelorette party. 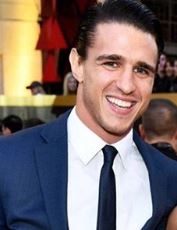 LoCicero has also acted in indie films like Welcome to Willits and Spaghettiman. According to his IMDb profile, the hunky actor is known for Someone Great (2019), Cop Chronicles: Loose Cannons: The Legend of the Haj-Mirage (2018) and Miss Bala (2019).
The 6′ 1″ Puerto Rican appeared as himself in a documentary called The Talent, which featured professional actors sharing their thoughts and experiences surrounding the acting business.
In addtition to his acting career, LoCicero is also an MMA fighter -which explains his great physique. When he’s not acting, LoCicero is training for Muay Thai competitions. He’s earned his fair share of amateur titles and Gina often shows up to watch and support him in the ring. Actions shots from his Muay Thai matches can be seen on his social media, including when he won the WCK Middleweight California Amateur Muay Thai Championship.

Over the summer, he joined the cast of soap opera, The Bold & The Beautiful, he landed the role of Vincent ‘Vinny’ Walker.