Geraldine Lovely is a technical sergeant in the U.S. Air Force, currently in the midst of a scandal after posting a rant criticizing colleagues on social media.

Lovely who is based at Nellis Air Force Base in Las Vegas, was removed from her supervisor position the Las Vegas Sun reported –following the profanity-laced online video she made singling out her black female subordinates, saying they have “no respect” and “constantly” have an “attitude.”

A member of the 99th Force Support Squadron, Geraldine Lovely is still under investigation Air Force officials said in a statement. Lovely, who is seen wearing military camouflage uniform, can be heard saying ‘she has (expletive) issues with lower-ranking black females.’ The minute and a half video has garnered over a million views. 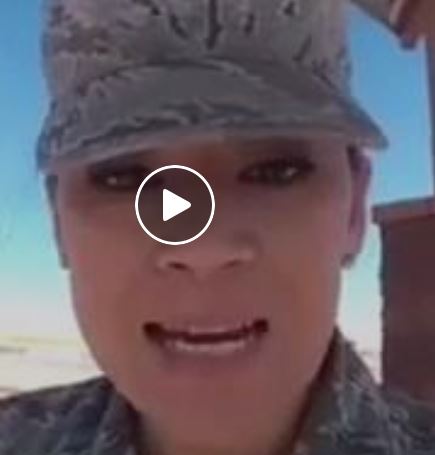 Gerladine Lovely was until recently the base’s fitness center administrator. At first she deleted the video after she received complaints about the footage being racist. Lovely certainly pissed off some people with her rant.

30-year-old Gerladine Lovely is a Texas native who graduated from Dumas High School in Dumas, Texas. She entered the Air Force in 2009 right after graduation. According to her LinkedIn profile, she holds a degree in hotel and restaurant management from the Community College of the Air Force.

From her social media we know, Gerladine is a mom of two children. The active duty mom declares herself a ‘Weight lifting, baby cuddling and make up addict.’

In addition to being in the air force, she is also an independent consultant; her Instagram features a link to a Scentsy page – a multi-level marketing company. She has over a thousand followers on the social media platform that is now set on private.

It appears sergeant Lovely isn’t so lovely after all…get it? Comments, thoughts below.