Yamin’s boyfriend needs no introduction, since stepping into the music scene in 2014 with his first major-label album “These Things Happen” G-Eazy, real name Gerald Earl Gillum -has released three studio albums and has been all over collaboarting with major artist.

The California native who began rapping while in college, gained notoriety around 2010-2011 when he began opening for well-known artists such as Lil Wayne. At the time he had released a mixtape ‘The Endless Summer’
Gerald wrote, recorded, and produced his first full-length album ‘Must Be Nice’ completely independently – and earned the No. 3 spot on the iTunes Hip-Hop Chart.

He is also known for being in a very public relationship with another big industry name; that would be singer, Halsey. The two went public in August of 2017 and split a couple of times before calling it quits in October of 2018.
RELATED LINK: G-EAZY 10 FACTS ABOUT HALSEY’S BOYFRIEND 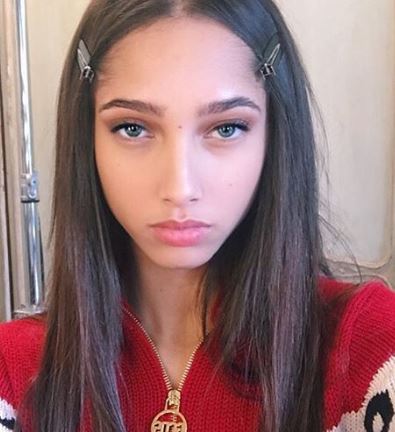 Now G-Eazy seems to have found love again in the form of Dutch model, Yasmin Wijnaldum -who is a regular on the catwalks of Chanel, Fendi and Valentino, Wijnaldum has also fronted fashion campaigns for Givenchy, Fendi and Moschino, as well as starring in beauty campaigns for Tom Ford. She also walked in the 2018 Victoria’s Secret Fashion Show.

Yasmin Wijnaldum was born July 10, 1998; the Amsterdam, Netherlands native began modeling in her teens.
She signed a professional contract with Elite Amsterdam -at the time she was in her final year of high school; and made her runway debut during Couture Fashion Week in the autumn of 2015, where she first walked for Jean Paul Gaultier and Valentino. That same year, she also landed on her very first cover for Vogue Japan.
She gained major exposure after becoming the face of Prada at the age of 17.

Since then the 21-year-old brown hair beauty -has walked the runway for the likes of well-known designers such as Valentino, Chloe, Giambattista Valli, Kenzo and Loewe. Yasmin who stands at 1.79 m and boasts mesmerizing blue eyes -has also appeared in editorials for publications such as American Vogue, Vogue Japan, and V Magazine.
She is represented by Elite Worldwide and The Society Management in New York.
Yasmin Wijnaldum and G-eazy first parked dating rumors in February.