Zsa Zsa Gabor was born Sari Gabor, on February 6, 1917, in Budapest, Hungary. Zsa Zsa is also known for her celebrity and socialite status.

Gabor, always lived a life of luxury, being one of three daughters of Vilmos Gabor, a soldier, and Jolie Gabor, the heiress to a European jewelry business.

Gabor began her career as an opera singer. She was successful in the pageantry world when she was crowned, Miss Hungary 1936. with her European flair and style, she quickly became a sought after actress after moving to the U.S. in 1941.

Her personal and romantic life were also filled with diversity. She is known for having nine-husbands. Prince Frederick von Anhalt being the most recent one.

Her first marriage came in 1937 to 35-year-old Turkish government official Burhan Asaf Belge. It is said, it was Gabor who popped the question. As a gift, she received a 10-karat diamond from her parents.

By 1941, she had joined her sister and mother to the U.S.; shortly after her arrival she filed for divorce.

Not long after her arrival, she met hotel magnate and recent bachelor Conrad Hilton. The couple met at upscale club. According to Gabor’s recounts, the millionaire offered her $20,000 to accompany him to Florida that night. She didn’t accept to the trip but only four months later she said yes at the altar. The were married in April 1942. It was in her second marriage to Hilton, that Zsa Zsa became a mother to daughter Francesca. Zsa Zsa and Hilton divorced in 1946.

Her third husband is actor George Sanders. The couple were married for six-years, from 1949 until 1954. This was followed by a string of husbands. Hubby number four is financier Herbert Hutner with whom she was married from 1962 till 1966; followed by oil tycoon Joshua Cosden from 1966 till 1967. Husband number six, inventor Jack Ryan, with who she was married for only a year. Attorney Michael O’Hara became husband number seven in 1976 until their divorce in 1983. That same year she wedded actor Felipe de Alba. Their marriage was annulled the following day. 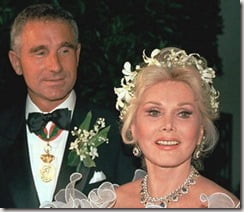 Prince Frederick von Anhalt, became husband number nine in 1986, though Zsa Zsa claimed in the past she was only married eight-times. It was Frederic Prinz von Anhalt’s first marriage.

Prince Frederick von Anhalt, kwon as the Duke Saxony and Westphalia, Count of Ascania, is roughly 30 years her junior. He was born June 18, 1943. He is the adopted younger son of Prince Joachim of Prussia and Princess Marie-Auguste of Anhalt.

Prince Frederick von Anhalt was born Hans Georg Lichtenberg, as one of five children of a criminal police councillor, Ferdinand, and his wife, Barbara. He was adopted as a 36-year-old adult by Princess Marie-Auguste of Anhalt. He is a former medical entrepreneur.

Prince Frederick von Anhalt has remained Zsa Zsa’s full-time caregiver throughout, despite numerous bumps in the road, such as his public claim that he had an affair with Anna Nicole Smith and mounting financial difficulties.

Prince Frederick von Anhalt also got into a legal battle with Zsa Zsa’s daughter, Francesca Hilton, after she accused him of mismanaging Zsa Zsa’s funds, botched her medical care, and refused to allow her to visit her mother.

In 2010 he announced his run as a California Mayor, but later withdrew citing Zsa Zsa’s health issues.

Zsa Zsa began dealing with serious health problems in 2002, when she was badly injured in a car crash. Her right leg was amputated in 2011.

Recent reports indicate she was rushed to the hospital, two days later after turning 99-years-old.

Zsa Zsa Gabor sadly passed away on Sunday in Los Angeles. According to her long time publicist, the legendary Hungarian-born actress died due to heart failure. She was 99.

Ms. Gabor is survived by her husband, Mr. Prinz von Anhalt. According to reports, he told The Associated Press:


“We tried everything, but her heart just stopped and that was it,” “Even the ambulance tried very hard to get her back, but there was no way,”

Following the sad news, many have paid tribute to the actress and iconic Beverley Hills socialite.

Gabor had been frail and used a wheelchair since a 2002 car accident, according to publicist John Blanchette.

The actress had been hospitalized numerous times since 2010, when she broke her hip in a fall. In 2011, her leg was amputated.