Michelle Troconis is the former girlfriend of murder suspect, Fotis Dulos -who has been charged in the death of his missing wife, Jennifer Dulos.

Michelle Troconis who was in a relationship with Fotis Dulos, has also been arrested.

Fotis and Jennifer Dulos were in the midst of a contentious divorce and custody battle when she went missing. Jennifer who is the mother of his five children, was last seen on May 24, 2019. Just days after she went missing, Fotis was taken into custody. At the time, Michelle Troconis who was identified as his romantic partner, was also taken into custody.
The two were in custody after investigators obtained DNA and hair samples from them. They are being held on $500,000 bond each. Both have been charged with tampering with or fabricating physical evidence and hindering prosecution.

Troconis, his then-girlfriend, told police he had the truck cleaned days later “because the body of Jennifer at some point was in there,” according to the warrant.

Michelle Troconis who is now described as his ex-girlfriend; is now currently charged with conspiracy to commit murder and the court set her bond at $2 million.
Troconis who was arrested back in June pleaded not guilty to the previous charges. She was released after posting a $100,000 bond, had to surrender her passport and was forced to wear a GPS monitoring device. 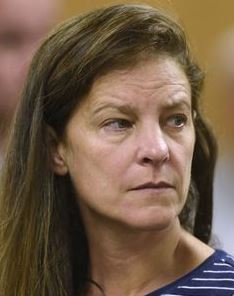 45-year-old Michelle Troconis is the mother of a teenage daughter with ex-husband, Gaston Begue. She and her daughter lived for a number of years with Fotis. Reports say she moved her belonguings to a new home in Avon last October.

Michelle is the daughter of renowned pediatric cardiac surgeon Carlos Traconis. Herself is a CEO and an entrepreneurial inventor who helped launch a ritzy world-renowned ski resort in Argentina. She studied General Psychology at the Central University of Venezuela and is trained as a therapeutic riding instructor at an academy in Michigan.
She worked at a riding center in Dubai in the United Arab Emirates and later worked for nine years as publicist at the Internationally known Cerro Castor ski resort in Argentina.
At some point she was also a host and producer for ESPN.
Most recently she was listed as the Event Coordinator at Outsourced Marketing Group a position she held since 2015.