Father Michael Reilly is the NY priest who’s been described as a tyrant for unleashing a constant stream of inappropriate remarks! The man of God has actually been sued.

The Rev. Michael Reilly is the principal of St. Joseph’s by-the-Sea, where he is accused of raining a steady spew of obscenities, insults and slurs on terrified staffers.

According to the suit, Father Michael Reilly once even threatened to boot a black man “back to the jungle,” and to kick a cancer patient “to the f—ing curb.”

The trash-talking Staten Island priest is, according to docs, incapable of expressing a single thought without dropping an f-bomb — or ten. The reverend’s language is described as rude, crude and abusive and what’s worse, for plaintiffs –who feel offended –his behavior is condoned by the Archdiocese and Cardinal Dolan.

The lawsuit also charged the Archdiocese ignored complaints made about Reilly just six months ago. 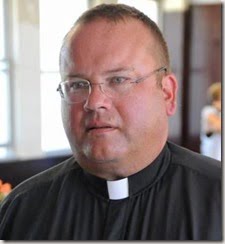 According to online info, St. Joseph by-the-Sea High School is a private Catholic school which exists to afford young men and women the opportunity to come to appreciate that every person has been created by God in His image and likeness, was redeemed by Christ, and is destined to become one with God. The NY Daily News, reports, parents have no idea of Michael Reilly’s alleged behavior;

Greg Young, whose son is a junior at the school, was surprised by the lawsuit’s allegations.

“(Reilly) comes to the football games,” said Young, 56. “He knows the students by name. This is a good school. If that’s happening, we don’t want it here.”

Father Michael Reilly took over the school, in 2009. His predecessor was Monsignor Joseph Ansaldi –who served as principal of St. Joseph by-the-Sea since 1982. Prior to his current role, Rev. Michael Reilly, served as vice principal and academic dean during his tenure at the school since 1996.