Ezra Dolezal is one of the African/ American adopted brother Rachel Dolezal’s parents adopted when she was younger, it was to him to whom she begged not to blow her cover.

Ezra Dolezal’s 37-year-old sister Rachel Dolezal Spokeane’s NAACP leader was outed by her parents last week as pretending to be black. Ezra who still lives with Ruthanne and Lawrence Dolezal in Montana recalled how he discovered his sister’s secret and she asking him not to tell on her.

She told me not to blow her cover about the fact that she had this secret life or alternate identity,” Ezra Dolezal said Saturday. “She told not to tell anybody about Montana or her family over there. She said she was starting a new life … and this one person over there was actually going to be her black father.

“There was the gradual darkening of the skin and the hair,” he said. “She started molding herself into who she is today.”

Ezra also told CNN his sister’s stories about the alleged punishments she received by the hand of her parents are 100% fabricated. The young Dolezal said he feels the whole thing is kind of a slap in the face.

He said he wasn’t surprised the truth came afloat, he understands what motivated her it all started when she enrolled at Howard University.

“I kind of saw it coming,” Ezra Dolezal said of the controversy. “Instead of sticking to a simple story, she’s been trying to make this really complex and it finally got too big for her to handle.”

Even though he doesn’t support the means his sister used to get to where she is, he must admit she had done great things .

“When she applied they thought she was a black student,” he said. “When she came there, they saw she was white and she wasn’t treated that well, especially by people that worked there. She probably started developing this kind of dislike for being white and dislike for white people. She used to tell Izaiah … that all white people are racists. She might have developed some self-hatred.”

“I believe that the first most important thing regardless of what a person does is that they have integrity,” he said. “Rachel has done really good work fighting against racism and police brutality … but she went about it the wrong way. She said I was born black. I grew up black and I know what it’s like growing up as an African-American in this world. She does not.”

Ezra’s brother Izaiah who Rachel refers to as her older son, sought emancipation from their parents in 2010, his petition was dropped, but that same year their sister Rachel was appointed his guardian with the consent of Ruthanne and Lawrence Dolezal. 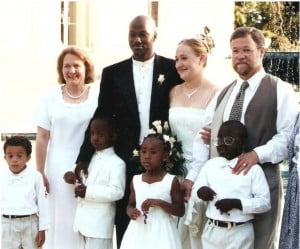 22-year-old Ezra Dolezal from Kansas City, Missouri was adopted by the Dolezals between 1993 and 1995, along him they adopted his brothers Izaiah, Zachariah and sister Esther. Ezra attended Troy high School and works in the U.S Army, he resides in Troy, Montana.