The couple who are over three decades apart have been married for several years and are the proud parents of three children.

Recent reports say the English star who’s hits songs include ‘Tears in Heaven,” “Wonderful Tonight” and who could forget one of rock’s most enduring classics in Layla –is sick with severe bronchitis.

Clapton has been a prolific solo artist and collaborator; he’s the only artist to have been inducted into the Rock and Roll Hall of Fame three times, for his solo output and his work with the Yardbirds and Cream.

The 18-time Grammy winner who once said during an interview he ‘got into the weirdest relationships for the rest of the ’90s’ before he met his wife –referring to Melia –was previously married to Pattie Boyd from 1979 until their divorce in 1988.

While married to Boy he developed a romantic relationship with Yvonne Kelly –with whom he fathered daughter, Ruth Kelly Clapton.

Clapton and former girlfriend, Lory Del Santo, suffered the loss of their son in March 1990. In a heartbreaking tragic accident, the couple’s four-and-a-half-year-old son, Conor, fell out of an open window in the high-rise New York condominium.

He then went onto marry Melia McEnery in a private ceremony in 2002. Following a life of the typical rock star, Clapton’s association with drugs, *** and alcohol had been well documented until he met McEnery. He quit drinking after the birth of Conor saying ‘he was really the chief reason that I went back to treatment because I really did love this boy.’

Following Conor’s tragic death Clapton coped by throwing himself into his work. The self described out-of-control womaniser, met Melia McEnery while at a party in L.A.

Getting back to the weird relationships part, Clapton told the Telegraph during an interview Melia, is the only woman he has ever enjoyed a genuinely equal relationship. The two have been married ever since and have three daughters together.

Melia McEnery first gave birth to daughter Julie Rose in June 2001, out of wedlock. The couple’s second daughter Ella May, was born in 2003. They welcomed daughter number three, Sophie Belle in 2005.

So what is it about Melia McEnery, that caugh the attention of a man who hooked up with the likes of models, actresses and rock chicks, including Naomi Campbell, Sharon Stone and Sheryl Crow? 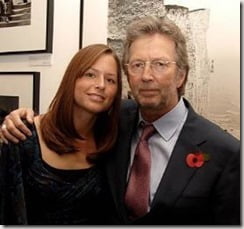 Melia McEnery 40, has been described as American of Korean-Irish parentage. She was raised in Columbus, Ohio where her parents still live.

The two met in 1988 at Giorgio Armani party.  At the time she worked for Armani and she and others had been put in charge of hosting the party.

Melia who was not supposed to fraternize with the guests could not resist to ask Eric for an autograph for her uncle.

Clapton said something about her made him want to be the perfect gentleman. So after a few dates the two became good friends. Talking about that first meeting he stated

She occupied her space with absolute authority. It was clear that even though she was half my age she was capable of being an adequate partner for anybody.”

The wife and mom of three has led a low profile despite being the wife of an iconic musician. The family split their time between England and the U.S.