Grammy winning rapper Marshall Bruce Mathers III best known as Eminem surprised fans by releasing a surprise album and has everyone talking about it.

The 45-year-old rapper, songwriter, actor and producer became an international sensation after the release of his first single, “My Name Is.” He won the Best Rap Album Grammy for three consecutive albums: The Slim Shady LP, The Marshall Mathers LP and The Eminem Show.

He also received the Academy Award for Best Original Song for “Lose Yourself,” from the 2002 film 8 Mile, which he also starred in. The Saint Joseph, MO; native once aspired to become a comic book artist but his path was clearly music.

He achieved mainstream popularity after signing with Dr. Dre back in the late 90’s. Since then his career has been nothing but hit after hit and that why he was labeled by Rolling Stone the King of Hip Hop. Facts that back up his suscces include Eminem as the best-selling artist of the 2000’s in the U.S.; he’s also had 10 number-one albums on the Billboard 200 and five number-one singles on the Billboard Hot 100. Mathers has sold more than 47 million albums and 107.5 million singles sold in the U.S. and 220 million records globally. Is safe to say, he is among the world’s best-selling artists of all time. 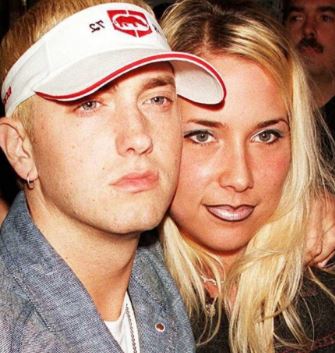 However, one daughter later and two marriages to the same woman, Eminem is yet to find that special someone.

We all know the story of his high-school sweetheart, Kimberly Anne “Kim” Scott to whom he was married first from June 14, 1999 until their divorce on October 11, 2001. They remarried on January 14, 2006, but divorced again later that year.

The former couple shares one daughter, Hailie born in 1995. He also has legal custody of Whitney, Kim’s daughter from another relationship and of Alaina –the daughter of Kim’s twin sister, Dawn.